Bookshots: ‘The Nix’ by Nathan Hill 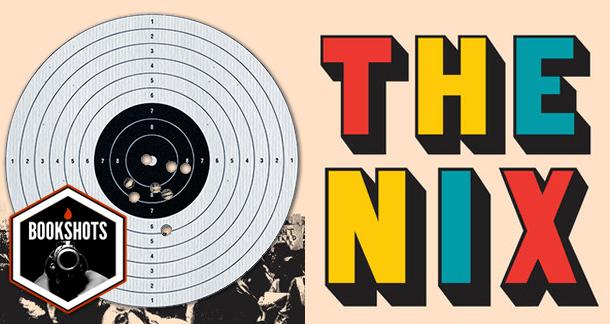 Winner of the journal Fiction’s annual Fiction Prize for his short story “The Bottle”, Nathan Hill’s short stories have appeared in publications including The Denver Quarterly, The Iowa Review and Fugue. He’s currently an Associate Professor of English at the University of St Thomas in St. Paul, Minnesota.

A ‘Nix’ in Norwegian folklore is a shapeshifter that often assumes the shape of a horse to lure the unsuspecting to a watery death.

Samuel Andresen-Anderson hasn’t seen his mother since she walked out on him when he was 11. When she reappears in his life in 2011, accused of being a radical hippie from the 60s, which doesn’t square with his understanding that she was a small town girl who married her childhood sweetheart, Samuel has to delve into her past to discover the truth.

I would call it: The Past is a Different Country

The Corrections by Jonathan Franzen

Samuel Andresen-Anderson, Assistant Professor of English addicted to playing World of Elfquest as Elven thief, Dodger, has abandonment issues after his mother left him in 1988. He’s also a stuck novelist, having spent the advance for the novel he promised his publisher a decade ago after the success of a short story he wrote at the time.

I think Ryan Reynolds has the right mix of geekiness and charm to pull this off.

Set mostly in and around Chicago — probably not.

A book is just packaging, just a container. This is what I’ve realized. The mistake people in the book business make is they think their job is to build good containers. Saying you’re in the book business is like a winemaker saying he’s in the bottle business. What we’re actually building is interest. A book is simply one shape that interest can take when we scale and leverage it.

A ‘Nix’ in Norwegian folklore is a shapeshifter that often assumes the shape of a horse to lure the unsuspecting to a watery death. Samuel’s Nix is his mother, Faye: the woman who abandoned her family when he was a child. And her return hasn’t been a pleasant — or anticipated — one. Arrested for assaulting a presidential candidate, she re-enters Samuel’s world when her lawyer contacts him to see if he’d provide a character statement.

The book journeys between events that took place in the summer of 1968, during the Democratic National Convention in Chicago to nominate Hubert Humphrey, to the 80s and back again to 2011. Samuel’s discoveries about his Faye’s past are nothing like he anticipated and even reflect some of the things he realizes about himself.

I didn’t find the characters sympathetic and found myself wondering, on more than one occasion, why I should care. The only character I felt sorry for was Pwnage, the leader of his guild in Elfquest, a game obsessive that reminds me of too many people I know. In the end, I did want to know what happened to Samuel. I didn’t hate it — I wanted to love it, but it didn’t quite get there.