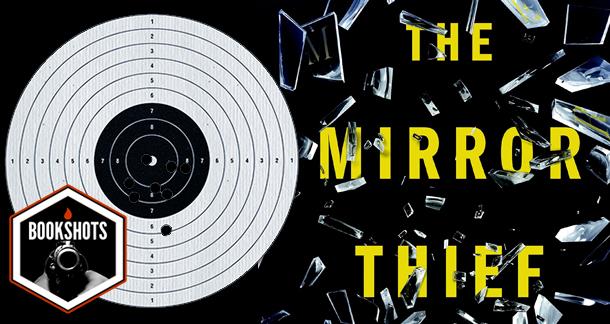 While I wanted to finish the book, like Cloud Atlas, it irritated me and even when finished, it didn’t feel quite complete.

This is Martin Seay’s first book and he describes himself as "a writer of literary fiction and cultural criticism."

This book takes place in three Venices: the Venetian Hotel in Vegas, circa 2003, Venice Beach, and 16th Century Venice. Curtis, an ex-Marine, is in Vegas looking for Stanley, a long-time gambler and con artist obsessed with a book of poetry centered on a 16th Century character, Crivano, who is attempting to steal the secrets of Venice’s world-famous mirrors. The Mirror Thief follows Curtis’s search, Stanley’s obsession with the book and Crivano’s efforts at industrial espionage, flipping back and forth from 2003 (Vegas), to the 1950s (Venice Beach) to 16th Century Venice.

I would call it: A Tale of Three Venices

Curtis is an ex-marine at loose ends, sent to Vegas to find his dad’s old friend, Stanley, on the orders of his new employer and old friend Damon. Stanley is an old con-artist who gambles for the sake of it, not because of the money. Crivano is a Nicosian scholar and secret alchemist captured by the Ottoman Empire and employed by the wife of the Sultan to steal the secrets of mirror-making from the Venetian empire.

Curtis would be played by someone like Wesley Snipes. Stanley I can see played by Alan Arkin and Crivano by Jeremy Irons.

Mister Welles, Stanley says, I would really like to know just how much of your goddamn book is true.

I found this book engaging from a plot point of view, as I did want to find out what happened to the various characters. However, the lack of quotation marks or other differentiating formatting for conversations, titles (not capitalised or capitalised, depending on some whim of the author) makes it an annoying read, particularly when it’s unclear who’s speaking at any one time.

Once you get past that hurdle (and I know readers who won’t) the story is intriguing, jumping from the time of George W’s invasion of Iraq to the various pasts and with realistically fleshed-out characters. The details are convincing for the historical settings and I didn’t notice any obvious temporal flaws. And, the over-arching theme—how mirrors reflect and distort reality, even to the extent of capturing essences or the belief that they have magical powers over the souls of men, particularly our images of ourselves—is interesting.

It’s hard to miss the comparisons with David Mitchell’s Cloud Atlas and would seem to be an obvious inspiration for this type of book. While I wanted to finish the book, like Cloud Atlas, it irritated me and even when finished, it didn’t feel quite complete. If you have issues with literary novels, this is not the book for you.