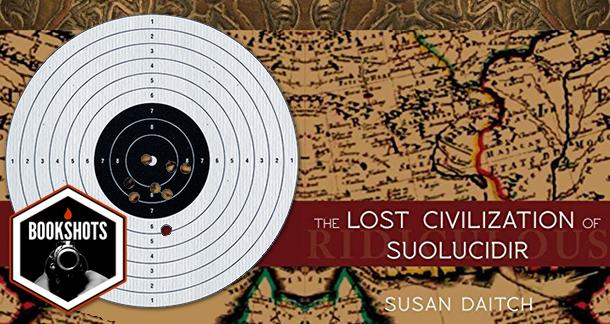 The Lost Civilization of Suolucidir

Why [do] we devote so much effort to the past, when the future is really all we have?

Susan Daitch, described by David Foster Wallace (presumably before he died) as ‘one of the most intelligent and attentive writers at work in the US today.’

A city is buried by a terrible natural event. In the centuries that follow, many explorers attempt to find it.

Suolucidir, ancient city, whose remains are buried somewhere in a hostile part of the Middle East.

Palmyra, recently reclaimed by Syrian forces from ISIL. The city contains Neolithic remains and has changed hands many times over the millennia (it was once a part of the Roman Empire). You could say it’s had an interesting history.

Live there: not on your nelly.

Know what this is for? I picked up a clyster, but didn’t wait for an answer. Treating syphilis before penicillin was found to be a cure. One could insert this into the penis you see.

I should have known what I was getting when I read Amazon blurbs for this book and saw the comparisons to Auster because Auster’s books are never about what they seem to be about and neither is The Lost Civilization of Suolucidir, which sells itself as an Indiana Jonesish tale of derring-do and the pursuit of archaeology in the face of overwhelming odds, but is in fact a story about the lusts that drive us and the darkness of our inner urges.

Now I don’t mind a book that claims to be one thing, but is actually another. Some of the best books I’ve ever read have approached me clad in what appears at first glance to be a ballgown and turns out to be fishnets and a black lace corset, and I didn’t mind this book, even though it promised to give me a mystery about a lost city and ended up handing me the mystery of the human condition. I enjoyed it, the way you might enjoy wandering a not terribly difficult maze of an obscure stately home. I found myself lost at points, and wondering why I’d wandered into this damn thing to start with, but knew I’d find my way out eventually and probably in time to get to the tea room and gift shop to enjoy a coffee and stale muffin before it closed. Suolucidir has that same pleasing sense of genteel eccentricity about it. It’s full of enticing corridors and winding staircases and letters written in code, but it doesn’t matter which way you take, at the end of the day you end up in the coachpark along with the rest of the visitors, ready to be taken home.

The joy of Suolucidir lies in the characters that Daitch creates. From the Nieumachers, a married couple of adventurers living a lie to Ryder Congreaves, who leaves his family to descend into poverty while he scours the desert for the elusive city, this book is packed with the fascinating, the weird and the obsessed. That’s the mystery: why we devote so much effort to the past, when the future is really all we have. You won’t find an answer to that question in this book, but you’ll enjoy the process of not getting an answer immensely.