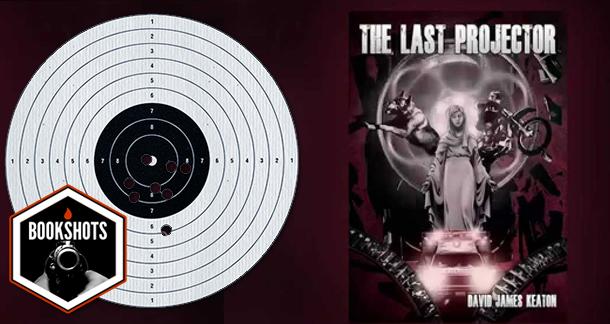 There are plenty of what the fuck moments in 'The Last Projector', but overall Keaton manages to balance out the weirdness with his distinct, hilarious voice and craft an intensely engaging plot.

Tattoos Are Ruining Everything

300,000,000 by Blake Butler, Cloud Atlas by David Mitchell, The Naked Soul of Iceberg Slim by Iceberg Slim (I'm just putting that one in there to fuck with you. But you should really read Iceberg Slim.)

Billy: Confused slam poet who has an absolute hard-on for both Bully and Officer BigBee. Both hard-ons are, however, completely different kinds of hard-ons.

Bully: Manic pixie slam poet girl who lives across the street from a drive-in movie theater. She has a hard-on for Officer BigBeet because she’s bored. She doesn’t have a hard-on for Billy, which makes Billy sad.

Officer BigMeat: The psycho K-9 cop with a million different variations of his name and the subject of Billy and Bully’s hard-ons.

Larry: John Hawkes (I don’t know if anyone has noticed this or not, but any time I like a novel and I come to this question, I always cast John Hawkes. I really like John Hawkes.)

Bully: Maggie Gyllenhaal (I can’t say I’m a huge Maggie Gyllenhaal fan. She’s made some decent movies and all, but she’s really not my cup of coffee. But there’s an awkward sexual tension going on between Billy and Bully, so I think the Gyllenhaal’s in these roles would exemplify the weirdness of the relationship.)

Officer BigBee: Thomas F. Wilson. Yeah, Biff from Back to the Future.

(Funny story about Biff. In the second year of my life with Mrs. Rawson, Mrs. Rawson worked at this hotel a couple of miles away from our apartment. Anyway, one week Biff comes as a chaperone for this Christian group his son is in. They’re real holy-rollers and kind of assholes, but you know, Mrs. Rawson had to put up with the assholeness. Anyway, on the last day of Biff’s stay, he comes to the frontdesk in his swimsuit and starts complaining about the vulgar  language some other teenage guests are using in front of his son and his Christian soldier buddies at the pool. Mrs. Rawson explains that she really can’t do anything about the foul language, because, hey, they’re guests, too. Anyway, Biff gets tomato red angry and starts shouting: “Don’t you know who I am? I’m Biff! I’m Biff, dammit!” I love that story, it always makes me laugh.)

The Last Projector isn’t exactly a "where" type of novel, but a when. Most of it takes place in kind of the 1980’s and I fucking hated the 80’s, so no.

If The Last Projector was an animal, it would be a jelly fish. It would be yellow and orange and red with shades of blue and green and would shimmer with joy every time you played a Styx album for it …

No, no, no, wait, if The Last Projector was an animal, it would be an octopus. It would still be yellow and orange and red with shades of blue and green, but it would hate Styx. It would absolutely fucking hate Styx and would attack submarines any time it heard "Mr. Roboto" or "Come Sail Away"…

Nonononononononono, okay, last time, I swear, last time. If The Last Projector was an animal it would be a squid. (I know, I know, jellyfish, squids, and Octopi aren't animals, but just roll with it) It would be a massive squid. A Godzilla size monster squid and it would be the only one ever captured, so it would be a sad squid. It would be a sad squid and any time it felt threatened it would shoot milk colored ink (wait, does a squid or an octopus shoot ink? I can’t remember? I guess I could Google it, but fuck it, I’m feeling lazy today, so we’ll just say it’s a squid that shoots ink) any time it felt threatened. The ink is the same color and texture as cum, so the Ronald Reagan looking motherfuckers who paid to have the squid captured and contained get an idea:

Before I go on, I’ll stop here because I want to talk about the commercial post-modernist novel. I know what you’re thinking: There’s no such thing as a “commercial” post-modernist novel. Sure, you can buy Thomas Pynchon and David Foster Wallace at Wal*Mart and airports now, but they’re not “commercial-commercial”. But what if you discovered a post-modernist novel with all the genius level word play, absurdist comedy, and page-upon-page of character and philosophical exposition, but with a beat you can dance to? Yeah, a well-defined plot that doesn't get lost and tangled in all that witty exposition. How would you define that kind of novel? I think you would define it as commercial post-modernism. I think you would define it as The Last Projector. Like most post-modernist novels—yes, even a commercial one—it’s not going to be for everyone. There’s going to be readers who scratch their heads or flat-out toss the novel because they just don’t get it, or walked into it thinking it was a straight forward humorous crime novel. And, yes, there are plenty of "what the fuck" moments in The Last Projector, but overall Keaton manages to balance out the weirdness with his distinct, hilarious voice and craft an intensely engaging plot.

Joshua Chaplinsky from New York is reading a lot more during the quarantine October 30, 2014 - 7:12am

Keith from Phoenix, AZ is reading Growing Up Dead in Texas by Stephen Graham Jones October 30, 2014 - 7:58am