Bookshots: 'The Inventors' by Peter Selgin 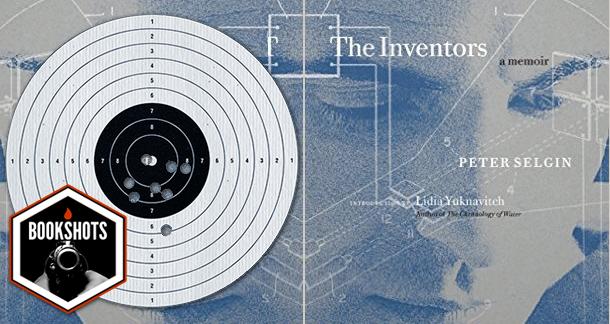 Peter Selgin, "a born writer, capable of taking any subject and exploring it from a new angle, with wit, grace, and erudition” (according to Oliver Sacks).

A writer struggles with the fictions his father and favorite teacher constructed about themselves.

Peter Selgin, the book’s author; Paul Selgin, his father; and “the teacher,” who bonds with him when he’s in 8th grade and reappears throughout his life.

Ellar Coltrane, from Boyhood, only this movie would be filmed over a period of fifty years.

The real setting is the author’s mind, so to a great extent we all live there.

(About the eighth-grade English prize)

And though you had understood, when the time came for the award announcement, in the gloom backstage, in that realm of curtains, ropes, battens, sandbags, and dimmer boards (all stained blood-red by workers’ lights), it tortured you to know that Vivian – whose term paper was about Sylvia Plath (“Sylvia: The Life and Death of a Poet”) – would win, despite the fact that not only was her paper shorter than yours by eleven pages, its subject had been dimwitted enough to stick her head in an oven.

If Peter Selgin was cynical, he’d look back on his life and see it as being dominated by imposters: an Anglophilic father who denies his Jewish ancestry and a charismatic, even seductive teacher who lies about who he is. But Selgin is a romantic, and a generous one at that. He sees these two men, the most influential in his life, as creative if troubled inventors – not habitual liars, but compulsive self-designers.

With wit, remorse, ferocious intelligence, and a little well-deserved self-pity, Selgin recounts his odd life with a mix of tenderness and ice. His difficult father was a man of calculating reason; his teacher – also smart but much more manipulative – was a magnetic dreamer who saw Peter as a wide-open door, walked right in, and never left. The Inventors is a terrific read. As Selgin's twin brother, George, writes in the afterword (after correcting many of Peter’s own inventions), “Do I like The Inventors? Of course not. I love it.”