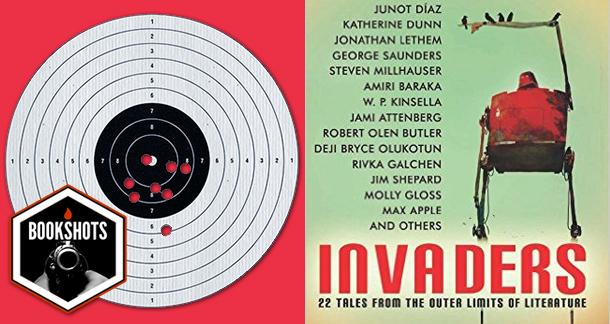 Invaders: 22 Tales from the Outer Limits of Literature

There's some darkness, a few laughs, and a lot of expertly crafted hooks.

Sometimes invaders are obvious, other times they blend in alarmingly well. They might even come from inside of us.

This is dodging the question a bit, but the cover and theme of this book kept taking me back to 1999 animated film, The Iron Giant.

A few leads include a rocket-building squid and a man whose sex life alters time.

I think that generally any squid would do, as long as it had some natural acting ability.

An almost impossible question in this scenario. “There” could be anywhere on Earth or a place far beyond it.

On a gauzy day in early autumn, senior citizens stroll around the pear orchard on robot legs.

Imagine that you and your family found a multidimensional portal in your backyard. It wasn't in the real estate listing for the home, but it mostly works. At first it's a bonding experience for the whole family to traverse dimensions together, but then the kids begin to change in some sinister ways. Is it the portal that has changed them, or are they simply drifting apart as families do? Which is more horrifying?

That's roughly the synopsis of J. Robert Lennon's aptly titled “Portals,” which starts off the anthology. Invaders seems to be a collection designed with the task of subverting and upending stereotypes about “genre” fiction in mind. Its authors weave complex speculative fiction within the short spaces alloted them. Whether a conscious effort or not, it does an admirable job of showcasing how seamlessly science fiction themes can be blended with a more traditionally literary voice. The stories are smart and balanced, with a dark side but highly readable.

Invaders covers a lot of ground between its 22 short stories. Sometimes the invaders are interpreted as evil metal giants, sometimes they're adults in a land of children. It's an interesting theme that the various authors clearly enjoy toying with. The stories range from ostensibly serious to comedy—oh, never-mind-that's-actually-really-serious-and-you-waited-until-the-last-page-to-sucker-punch-the-reader. There's some darkness, a few laughs, and a lot of expertly crafted hooks.