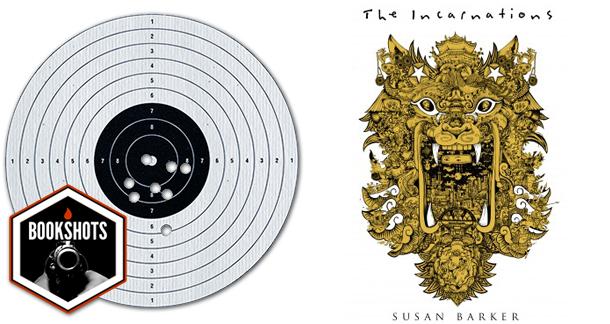 Barker's tale of reincarnated souls is both brilliant and addictive.

Susan Barker, author of The Orientalist and The Ghost and Sayonora Bar.

Someone (or something) is watching taxi driver Wang very closely and writing him letters about his past lives.

Teeth of the Past

The Undertaking of Lily Cheng by Danica Novgorodoff or The Gargoyle by Andrew Davidson.

The deceptively self-effacing taxi driver Wang, a man struggling to get himself and his family by from day to day in modern Beijing.

Trying to fill out this section became difficult as I realized just how few Chinese actors I've seen outside of martial arts movies. That needs to definitely change. In the meantime, I'd choose South Korean actor Ha Jung-woo.

Hard question to answer in this case. The reader is exposed to many views of China through the centuries, some elegant and some cruel.

Fate has us brawling, red in tooth and claw. Fate condemns us to bring about the other’s downfall. To blaze like fiery meteors as we crash into each other’s stratosphere, then incinerate to heat and dust.

The Incarnations presents a tapestry of Chinese history and lore across the many lifetimes of its characters. Always intertwined, always loving and hurting each other, Barker's tale of reincarnated souls is both brilliant and addictive.

Wang is a thirtyish guy with a kid and a wife, living in a plain concrete apartment complex in Beijing. Things aren’t great, but they’re not horrible either; it’s modern survival. Then the letters begin to arrive. They are addressed to Wang, found in his locked taxi cab.

Written in a fervent and frightening hand, they come from a person who claims to be Wang’s companion from across lifetimes; a being who blew into the city on the winds of the Gobi Desert. He/she watches his family and scrutinizes Wang as he works. The letters are haunting, uncomfortably voyeuristic, and fascinating. The details of Wang’s past lives and present history are exposed, unraveling as he desperately tries to connect his stalker to a flesh and blood person.

From the horrific lives of the besieged citizens of Zhongdu, struggling to survive the Mongol invasion on the bones of rats, to the tale of the palace eunuch and his charming daughter, the letters from the unknown stalker are complete stories on their own. In less capable hands these diversions from the present might feel disconnected or distracting, but instead they bind everything together. They tease the reader as much as they torment Wang. They're poetic and charming at times despite the threats burrowed within them, and contain a fairy-tale-like quality.

The evolution of Wang is another trick that Barker pulls off admirably. At first glance, he seems like a typically unassuming, Average Joe type of protagonist. But just as the mysterious narrator peels back the layers of time, he/she also divulges the many nuanced lives of the man now known as Wang. Without much changing in the present day, the character becomes infinitely more interesting. Incarnations doesn’t progress forward in a linear fashion so much as it deepens and moves inwards as the past is exhumed, plunging towards the revelation of Wang's mysterious soulmate.