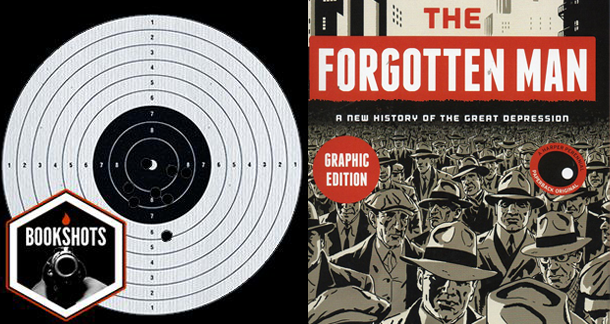 The Forgotten Man: A New History of the Great Depression - the graphic novel edition

Words by Forbes syndicated columnist Amity Shlaes, bestselling author of Coolidge, The Forgotten Man and The Greedy Hand. The book is illustrated by Paul Rivoche, co-creator of 80s icon Mister X, cover illustrator for comics like Iron Man and Superman.

If you don’t know anything of the economic, political and world events that occurred during this time period and want to know more, it’s a decent primer with plenty of detail.

A book about America’s Great Depression, originally published in 2007, The Forgotten Man attempts to show the actions and events that unfolded in the ten years after the stock market crash of 1929, portraying the actual politicians, advisers and corporate figures who influenced and changed the way America dealt with severe economic disaster — changes which are still being felt today.

I would call it: The Great Depression Explained in Pictures

The Worst Hard Time: The Untold Story of Those Who Survived the Great American Dust Bowl by Timothy Egan, or any other book about the Depression.

The book is narrated by Wendell Wilkie, head of utilities company Commonwealth and Southern, who spent most of the 1930s battling the Tennessee Valley Authority, an initiative by the government to provide light and power to the most deprived areas of America. Fed up with the changes, he unsuccessfully ran for President in 1940 against the incumbent, Franklin Delano Roosevelt.

Jon Hamm, Don Draper in Mad Men, as he’s already proven he can play period characters and has the chiseled jaw of the graphic novel’s Wendell Wilkie.

Having talked to relatives who lived through the Great Depression and read numerous accounts of the time, I would definitely NOT want to live here. It was a time of great uncertainty and survival was not guaranteed. Oh wait, that sounds a bit like the last five years…

Numerous FDR quotes are included in the book, but the one he campaigned on (and the inspiration for the book title) was:

The present administration in Washington has either forgotten or it does not want to remember the infantry of our economic army… The Forgotten Man at the bottom of the economic pyramid.

This is a paraphrase of the original quote, the phrase ‘The Forgotten Man’ taken from the title of a book by William Graham Sumner, the first professor of Sociology at Yale.

I am tempted to go read the original book now that I’ve read the graphic version, as it is a compelling subject if you have any interest in what happened in the decade leading up to World War II. That said, my main complaint would be that the graphic version jumps between characters at times, leaving some doubt as to what or who is the focus of the current section. The intervals where Wilkie explains what’s happening with his personal take on things can often feel tacked on, too — I didn’t always feel it added to the story.

If you don’t know anything of the economic, political and world events that occurred during this time period and want to know more, it’s a decent primer, with plenty of detail. It also includes a timeline of events at the back which puts a lot in perspective. But if you’re not interested in the Depression, I’d guess all the facts and figures could feel, well, a bit dry.