Bookshots: 'The Final Programme: The Cornelius Quartet 1' by Michael Moorcock 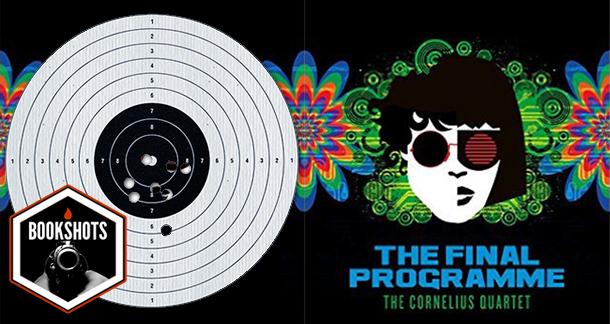 The Final Programme: The Cornelius Quartet 1

It's a bit on the campy side, looking at 'The Final Programme' from the year 2016, but that's part of the charm.

Jerry Cornelius leads a party to infiltrate his late father's house and obtain critical data for a secret project known as DUEL.

Bob Shaw, Arthur C. Clark, and John Dies at the End by David Wong. And completely out of left field, it also made me think of the Cartoon Network television show Steven Universe.

The Final Programme is heavily ensconced in the developing counterculture of London in the sixties. I'm not sure if I'd want to live there permanently (there's a reason why men's ruffled blouses went out of style).

Only Mr. Lucas hadn't arrived by two o'clock, and they gave him up, feeling annoyed with him—which wasn't quite fair, for Mr. Lucas had been stabbed to death in Islington the previous evening and robbed of the best part of his casino's takings by a much-embittered all-time loser who, by the following Monday, would fall downstairs and kill himself while taking the money to the bank.

In this reprint, John Clute's introduction begins by explaining that Moorcock created his main characters with the intention that they should be used. Other writers were welcomed to use them in their own works; a kind of early Creative Commons effort, since The Cornelius Quartet was originally penned in the sixties and seventies—a fact that's hard to ignore amidst the hallucinogenic gas clouds and Beatles references. It's a good piece of information to come to terms with early on in the book. There's an experimental sense to the narrative from page one, as though absolutely anything could happen to its singularly odd protagonists.

I want to acknowledge that this is my first Moorcock, and in writing this review I'm judging an extremely prolific author on the basis of one of his earliest publishing attempts. The writing is slightly uneven, leaving the impression of someone who is still finding his own voice. Dialogue in particular tends to be rather abrupt (and occasionally hilarious). Because of this, I kept imagining the characters speaking like actors with mid-Atlantic accents from a grainy old film. It's a bit on the campy side, looking at The Final Programme from the year 2016, but that's part of the charm, and Malcolm Dean's illustrations only add to it.

Throughout the text there are a fair number of conversations on metaphysics, an incestuous relationship or two, and an entire page of the word 'HA' repeated again and again near the end of the book. I wasn't always absolutely certain of what was happening, but one tries. The Final Programme concludes with Jerry and Miss Brunner fusing their bodies to become “the world's first all-purpose human being.”

It's worthwhile reading for science fiction fans who want to trace the progression of both the author and the genre he partially helped to form. Honestly, this trailer for the 1973 film is probably worth watching if you're on the fence about reading the book. Moorcock may have had some creative differences with the film's direction, but it still offers a small taste of what readers have to look forward to.

The Final Programme: The Cornelius Quartet 1 (The Eternal Champion)