Bookshots: 'The Fangirl's Guide to the Galaxy' by Sam Maggs 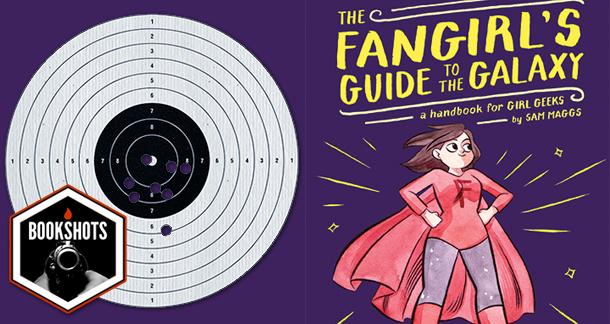 She reminds her audience over and over again that if they don't see the female-friendly geek world they want, then they need to go out and make it.

Sam Maggs, a writer and Associate Editor of The Mary Sue, a website devoted to the representation of women in pop culture.

A light-hearted but well-researched and useful compendium intended to introduce women and girls to the fandom universe and encourage them to get out and play.

Live it Up, You Fabulous Lady Nerd!

DC or Marvel comics, A Song of Ice and Fire, or other genres typically dominated by a male audience.

The ngirl (fangirl) gets the feels for comics, sci-fi, and video games. She tries her hand at fanfiction, rocks some handmade cosplay at comic-con, and participates in the discussion about the slut-shaming of women in action films.

A world in which geeky girls can openly express their love for Star Trek TNG? Absofuckinglutely!

Have you ever gone to a convention or a tabletop night and had someone quiz you on your nerd cred? Probably yes.

I went into this book not thinking of myself as a "fangirl" at all, yet within the first few pages it was like the author was speaking directly to me. In the "Field Guide to the Geek Girl" section, she cleverly identifies likely areas in which a girl might be geeking out. YA fiction, Star Trek, Star Wars, Sherlock....OMG, STOP LOOKING INTO MY SOUL, SAM MAGGS. She touches a number of times on the false notion that women are "fake" geeks, calmly reminding us that everyone has to start somewhere as they get into a series or genre. She then gives good suggestions on where to start if, for example, you want to explore some anime and have no idea what to try first.

The richness of the text is in Maggs' promotion of content creation. She reminds her audience over and over again that if they don't see the female-friendly geek world they want, then they need to go out and make it. She makes a strong case for trying one's hand at fanfiction, a genre that many published authors have waded into at some point in their lives. (Notoriously, Fifty Shades of Grey by E.L. James began as a fanfiction series involving Edward and Bella from Twilight, and that seems to have gone alright for her.) Fanfiction, online forums, and  social media outlets are promoted as great ways to find and connect with ngirls who share similar interests. Conventions serve a similar purpose, and Maggs devotes a lot of space to exploring the wide variety of conventions taking place throughout the year, going beyond the San Diego Comic Con and Wizard World standbys (IndieCade or GeekyCon, anyone?).

Trolls, harassment while in cosplay, and general patriarchy bullshit do get some attention, but mostly to remind the reader that there is strength in numbers. For example, when enough women speak out about inappropriate touching at conventions, Cosplay is Not Consent policies start popping up at events. Throughout the book, Maggs sprinkles short interviews with successful women in film, fiction, and gaming that focus on the positive influence being a geek has had on their lives. Overwhelmingly, these women remind the reader to embrace her geeky identity, and good things will inevitably follow. Highly recommended.

Bookshots: 'fic: Why Fanfiction Is Taking Over the World' by Anne Jamison