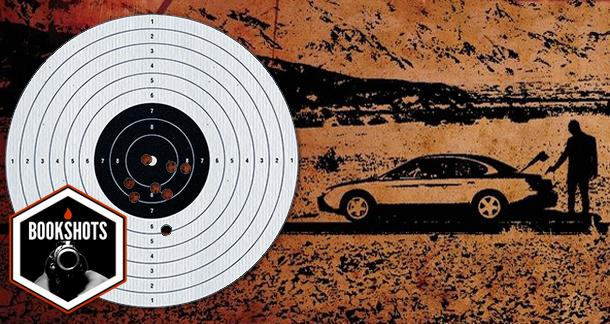 The story became something deeper, more than a shocking and twisted sketch of violence in the desert.

The novel follows Frankie Avicious, a man who has taken all the wrong turns in life. Although he married Ruth Richardson, a woman with a stinking rich father, he received none of the benefits. Instead of a high end job at Sunshine Foods, the slaughterhouse Richard Richardson runs, he works right in the thick of it all, cutting the throats of cattle. He's got a drinking problem, a crush on a stripper named Scarlett, plenty of enemies, and not much of a future ahead of him...until he starts putting his penchant for killing to use in an attempt to change the course of his destiny.

So I was up Shit Creek without a paddle or a plunger.

I didn't know what to make of Frankie at first. He seemed to be a pessimistic drunk with no loveable qualities, a tough narrator to follow. As the novel progressed, however, memories from his past began to bleed through and I felt something like sympathy for him. I was glad for some of his backstory. Once I knew more about why he was the way he was, I could get on board. The story became something deeper, more than a shocking and twisted sketch of violence in the desert.

I don't naturally gravitate to novels like Bassoff's The Disassembled Man, but after reading it, I'm wondering why! I imagine Bassoff had a great time writing this book. It's filled with both original and previously forgotten (but great) turns of phrase. Frankie gets himself into wild situations, and it's a thrill to read as he manages to barely skate by. The other characters are distasteful, yet certainly entertaining. My favorite was probably Richard's ex-wife, Marilyn, who had since moved on to guzzling martinis and remarrying a mailman, every woman's dream.

Although I sometimes got lost in the blood and darkness of it all, it was all worth it for the payoff of the ending, which I found to be so well done and eerie that I got goosebumps. If you're looking to read something raw, creepy, and fast-paced, pick up The Disassembled Man. Good luck "keeping it together."