Bookshots: ‘The Boys of Summer: A Novel’ by Richard Cox 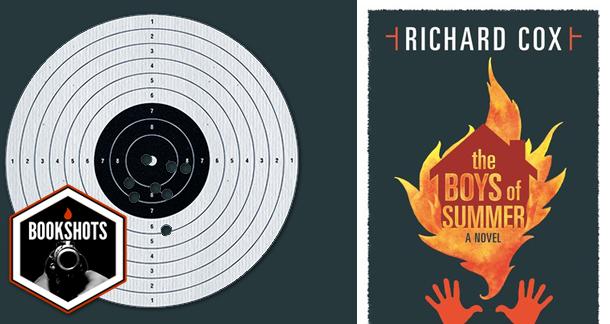 The Boys of Summer: A Novel

Author of three previous books, including The God particle and Thomas World, Richard Cox has contributed to TheNervousBreakdown.com, The Land Press and Oklahoma Magazine.

A massive tornado ripped through the town of Wichita Falls in northern Texas in April 1979, tearing apart the town and the lives of five boys and a girl at the same time. Fast forward to 2008 and events that happened after that first tornado are occurring again, bringing them all back to Wichita Falls.

The book’s based on actual events that took place in 1979, when a massive tornado killed more than 40 people

I would call it: That Tornado Screwed Up My Life

It’s already appearing in the lists, so if you liked Stranger Things you’ll probably enjoy this, too.

The book centers around Jonathan, Bobby, David, Adam and Todd. Jonathan is the bookish one, thrown together with Bobby, the jock, when the tornado of ’83 takes a parent from each of them, Jonathan’s father and Bobby’s mother. The resulting dysfunctional family is plagued with survivor's guilt and alcoholism even into adulthood. Adam’s guilt at the loss of his sister, accompanied by guilt of another kind makes him turn to God, at least on the surface. David didn’t lose anyone in the tornado but has since become a very successful finance guru. Todd, the odd one out of the group, spent four years in a coma after the tornado and came out of it changed, able to see and hear things most people can’t.

This is difficult with the ensemble cast, but I can see someone like a young Anthony Michael Hall playing Todd and a young Matthew Broderick playing Jonathan.

Smack dab in the middle of tornado country? Not a chance.

She’d left maybe thirty minutes before to buy medicine, and since no one in the family was ill, the kind of medicine she probably meant was the liquid his parents like to pour into their sodas or into glasses so tiny they held only one swallow. And anyway it seemed like an odd name, calling this stuff “medicine,” since typically when his parent drank it they felt sick the next day.

The book’s based on actual events that took place in 1979, when a massive tornado killed more than 40 people. Starting the story four years later, The Boys of Summer switches between 1983 and 2008, tying events that happened then to things happening in the more recent past. And yes, the title is taken from the Don Henley track from 1984, coincidentally, also the name of the boys’ gang.

While the book focuses on the gang then and the individuals in 2008, Todd is the crux of the story, knowing things and “writing” songs that would come out years later, including the Don Henley song. His strange ideas and understanding of how things work is tied to his time in the coma, but no one, including Todd, understands exactly what it all means. But, he uses his knowledge to manipulate the group, getting them to do things they wouldn’t necessarily consider, with unintended results, then and in 2008.

It’s difficult to tell you much more without spoiling the story, but I really enjoyed The Boys of Summer. Like Stranger Things and IT, Cox has created a story where the central characters are children whose actions influence their surroundings. Don’t get me wrong, I don’t like some of the characters, but then, that’s like life, isn’t it? It’s certainly worth a read and I’ll be looking forward to reading anything else he writes.