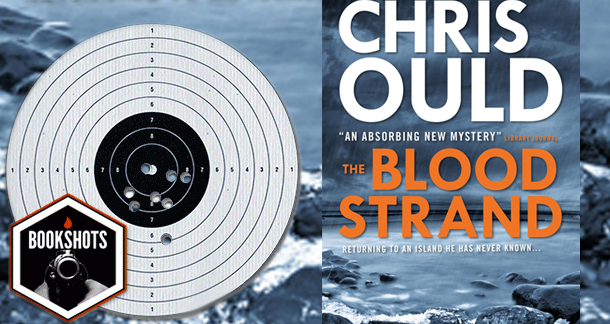 This is one of those books that explores the idea of “family” and what it means to be from somewhere.

Chris Ould is a British, BAFTA-winning screenwriter for numerous UK television programs, including The Bill, Casualty, and Hornblower. He has two previous novels and two young adult novels to his name.

A middle aged policeman from England returns to the Faroe Islands after many years when his father is found unconscious in his car. Looking for answers about himself, his mother and “family”, he gets involved in solving the riddle of his father’s condition and then a murder investigation.

I would call it: It Rains a Lot Here

It reminded me a lot of Henning Mankell’s Wallander books, both in terms of place and the characters, not just that it’s set on the remote islands between Iceland and Norway.

English detective Jan Reyna is Faroese by birth, but has lived in England most of his life after his mother left his father. She died shortly after they moved to the UK. Raised by his aunt and uncle, he considers himself English, not even speaking Faroese, but with the blond hair and features of one from the islands. And, barring one disastrous trip the islands to ask his father questions, he hasn’t been back.

It sounds starkly beautiful, but the incessant rain would be difficult to deal with, so no.

Even aged five I’d have known I would never go back, so why cling to the language?

The Faroe islands are a tiny group of atolls huddled in the North Atlantic about midway between Norway and Iceland. The people are of the same stock as those places, with a good portion of the islanders having the blond hair and blue eyes we associate with the Norse countries. Ould’s book gives the reader a good sense of the place, its isolation and ruggedness, the constant rain, as well as the people. It doesn’t make me want to go there, but he evokes its harsh beauty in his descriptions.

This is one of those books that explores the idea of “family” and what it means to be from somewhere. Jan is still trying to work out who he is, regardless of his belief that he is English, not Faroese. As they say, “Denial ain’t a river in Egypt”. The fact he gets dragged into the mystery of his father’s stroke in a car in a remote location and subsequent related deaths, after being guilted into returning by his aunt, is practically incidental as it all seems to revolve around the question of why his mother left in the first place.

It would be easy to dismiss this as yet another piece of Scandinavian Crime Fiction, barring the fact that it’s written by an Englishman. I like the feel of the book, the sense of remoteness not just of the place but the people and the way Ould’s put it all together. I can’t say Jan is likeable, being nearly as remote as the islands sometimes, but I did grow to empathize with him. As there are two more books planned, I’m looking forward to reading them, too.