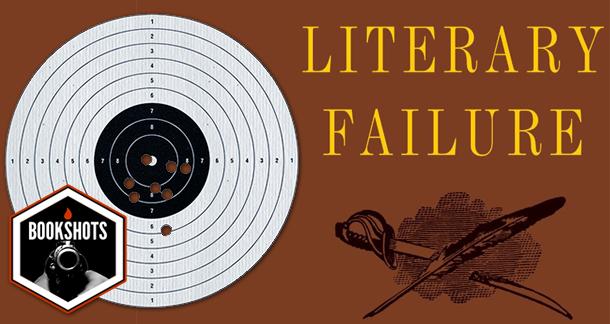 The Biographical Dictionary of Literary Failure

Focus too much on the rules...and these are the consequences. Failure. Of the most spectacular kind.

Depends on how you look at it. Maybe these writers wrote their own stories. Or maybe the writers don't exist at all. Either way, editor C.D. Rose is responsible for cobbling together the entries.

More a short story collection than a dictionary, this book is an homage to the many ways writers can fail.

Chicken Soup for the Anti-Writer's Soul

The blog. These were part of a weekly blog that was deleted (on purpose, premeditated) a year after its creation.

Each entry has its own lead. There are fifty-two in total, one for each week of the year the blog existed.

Whoever posed for the silly photo at the start of each chapter. Entry 51 has a pretty funny black-and-white pic of some middle-aged guy dressed like he stepped out of the last century, but we're supposed to believe he was a teen in the late 1980s? Obviously a set of actors.

All of these characters seem to live in the dark streets Poe spent his last night on. So yeah, no thanks.

Sometimes she looked amongst the cabbage stalks and coffee grounds in the garbage can, watching her thesaurus rot, not throwing it out but taking grim pleasure in its gradual decay. (Entry No. 49, Wendy Wenning)

I confess that I started reading this book without any knowledge of the blog, which means I took the title at face value. I thought I was picking up a literal dictionary of literary failure. In some ways, this might make me sadistic. Why did I want to read a book about other writers—people like me just trying to get along in the world—meeting spectacular failure? Maybe I wanted to learn something. Or maybe I just wanted to celebrate not being them. Either way, I started the book with an honest hopefulness.

At first I felt sad for these poor schmucks—a lost manuscript on the way to a publication meeting with T.S. Eliot? Writing pure gold that never sees light due to bibliophagy?—but the warning signs started to go off a few stories in. The tales were too tall, too funny, the narrator too omniscient. Many were like a case study in Alanis Morrissette's "Ironic" as told by Saturday Night Live's Stefon. They read more like short stories than dictionary entries. So I consulted the almighty Google, found the (former) blog, and realized I'd been duped. But it was my own fault, really. And once I came to terms with the joke I'd somehow managed not to let myself in on, I was able to enjoy the rest of the book.

Literary Failures reads like an Aesop's Fables of writerly issues. Each tale serves as a warning for writers, each forming an urban legend—nay, a horror story—around a writerly vice or hangup or obsession. Focus too much on the rules, on the "well-worn pantheon alongside show-don't-tell, murder-your-babies, application-of-bum-to-seat and so on" and these are the consequences.

Failure. Of the most spectacular kind.