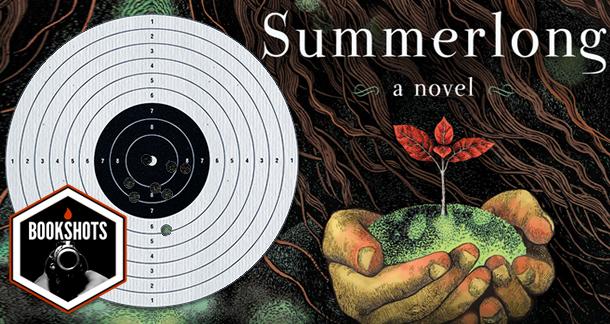 A delicate and interesting work of speculative fiction that should please old Beagle fans and win him a few new ones.

A quiet couple in late middle-age stumble upon an enchanting young waitress with some unusual characteristics and take her under their wing.

I could see Paul Giamatti as Abe. Shirley Henderson would be Lily, Isabella Rossellini as Joanna. Lioness is much harder to place. Maybe Emma Stone?

Summerlong takes place in the mist and drizzle of Puget Sound. Beagle writes it as a somewhat isolated, but beautiful place. I'd give it a go.

She was curled on Lily’s cherished blue-corduroy window seat, wearing her new green dress and a cheap glass necklace that
glittered in the candlelight, serenely flaunting its tackiness.

I should confess that I've been a Peter S. Beagle fan since a beat-up copy of The Last Unicorn catalyzed a bit of a fantasy binge back in sixth grade (my teenage self adored Tamsin). The beginning of Summerlong moves along with the speed of a slow boil, requiring a bit of trust and patience on the reader's part that the meat of the story will manifest itself. “Speculative fiction” is an accurate title here, I think. There's barely a whisper of anything less than ordinary happening until page 50 or so.

Beagle spends his time crafting a world through small moments and little details— silent dialogues of caught glances or shifting eyes, the kinds of clothing characters wear or what they like to cook for dinner. In Summerlong, these details read as more than mere character development, they're also a convenient camouflage for the more fantastic elements. The author leaves a sparse trail of bread crumbs for readers to follow, stomping on the brakes whenever there's danger of too much information leaking at once. Just when something unusual happens, the story quickly slips back into a smokescreen of dinner party conversation.

A lot of the bread crumbs are fed to the reader via conversations of longtime (decidedly unmarried) couple, Joanna and Abe. The young woman they take in named Lioness, who has the winning power of making orcas dance for her, is an appropriately more elusive character throughout the early chapters of the book.

In short, Summerlong is a delicate and interesting work of speculative fiction that should please old Beagle fans and win him a few new ones.