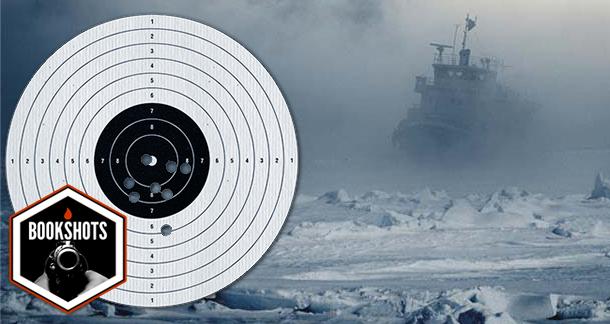 A fun, intense ride and perfect for fans of Joe Lansdale and Brian Keane. Definitely make Stranded your Halloween read.

Former trial attorney and the one dude in the horror community who kind of scares me, Bracken MacLeod.

Noah Cabot is a natural born sailor. He comes from three generations of fishermen, but decides to go the academic route instead of following in the old man’s footsteps. He moves to Seattle, goes to school, meets a girl (the said girl’s father hates Noah with a blinding passion), falls in love, gets married, has a baby, girl dies, leaving Noah distraught and a single parent. Hard up for money, he reluctantly takes a job on an oil tanker piloted by his father-in-law (yeah, the one who hates him with a blinding passion). Virtually everyone on the tanker hates Noah just as much as his father-in-law, but for different reasons (largely because of an accident that occurred on another freighter).

From the get go, the voyage aboard the Arctic Promise is fraught with peril. After one particularly rough storm, the crew all comes down with massive, unexplainable headaches and they find themselves stranded on a frozen ocean. Animosity, perilous trips across the ice, a trip to a parallel dimension, and hilarity ensues!

Pretty much anything by Brian Keane

I’ve been shying away from this question for a few months now. But with Stranded, I just couldn’t get Joel Edgerton out of my head. He was born to play Noah.

…He stared up at the subtle pair of silver curves arcing across the sky like a child’s ribbons dancing in the wind. Northern lights. He’d seen them before. Those had been more vivid and colorful. These lines were peculiar. Their soft beauty was somehow wrong when viewed from where Noah stood. A place of uncertainty and danger that didn’t belong under beauty so tender and ethereal. He imagined what it must be like to stand in Hell and look up to Heaven. The distance from it. The alienation it planted in his heart like a seed of despair pushed deep into fertile soil. He wished clouds would roll in, he hoped for a storm to blow the lights away. But they remained above, shining down with false hope.

When October rolls around, I always hope for a horror novel to come out that will instantly grab me and make me read until my eyes are running down my cheeks like melted balls of wax. Luckily, because it's October, virtually every horror publisher great and small is hoping the book they’re putting out will be the one to do it. But when it comes to horror, certain publishers know their business better than others and they stash titles like Stranded until every heavy metal kid’s favorite month of the year comes rolling along.

Here comes the part where I say Stranded is the perfect Halloween read.

MacLeod builds tension slowly as the small crew of the massive ship grinds against one another. There’s a shroud of constant paranoia running through the book that immediately draws the reader in. There’s a madness affecting the ship, turning the crew into hurt-filled machines who all want to turn their hate against Noah Cabot. Or maybe not? Maybe his shipmates' anger is entirely an invention of Cabot’s racing, sorrowful imagination? Is he actually alive?

And while I think Stranded is the perfect Halloween read, there were a couple of small things about the novel that threw me off. There was a little too much build up for the eventual weird pay off for my taste and I thought Noah was a complete asshole. But then again, I think everyone’s an asshole, so it’s okay for Noah to be a little unlikable.

Overall, I thought Stranded was a fun, intense ride and perfect for fans of Joe Lansdale and Brian Keane. Definitely make Stranded your Halloween read.

Thanks. Just read Rob Hart's interview ith the author. I am interested in this book. The favorite line you posted is pretty good. I got a little antsy about reading your verdict, because I'm not sure I want a verdict until after I read it. Sorry about that, I sort of skipped. gsr