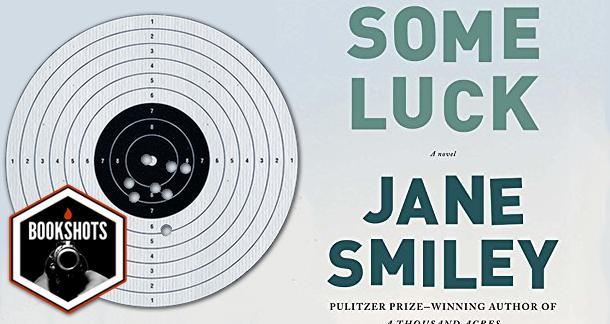 Man and woman marry and settle on an Iowa farm in 1920. They have kids. The kids grow up. America changes.

Life with Father (and mother and lots of cows and sheep)

Rosanna and Walter Langdon, farmers and parents to a whole passel of kids

Said leads would be played in a movie by

Jennifer Garner in Butter mode, would do well as the slightly too buttoned up Rosanna and Nathan Fillion would fill out a pair of dungarees nicely as Walter

A farm in Iowa during the dirty 30s? Perhaps not.

I’ll come clean at the outset and admit that I’ve been a hardened Smiley fan since I spent a long ferry trip between Sweden and Blighty reading Horse Heaven while my kids destroyed the boat’s one and only playroom. Smiley writes long, gorgeously complicated books spread over a canvas the size of Donald Trump’s ego, perfect for those times when you need your reading material to transport you from the harsh reality of ripped plastic and wailing infants, to a better, fictional place.

After my sea-borne encounter with Smiley’s rendering of life around the business of horse racing, I wanted more. I devoured A Thousand Acres which won her a (much deserved) Pulitzer and proceeded to the book which is probably her finest: The Greenlanders. I’ve read lesser Smiley too: Barn Blind, Good Faith. Even Moo which many adore, didn’t quite hit the target for me. But Smiley at her best is very good indeed. Could she, I wondered, at this later stage in her career (she’s 65), pull off another blinder?

The answer is, I don’t yet know. Some Luck represents the first part in a trilogy, one which Smiley has dubbed ‘The Last Hundred Years’, the ambition being—I guess because she hasn’t explicitly said so—to capture a century of America through the prism of a single family. That makes Some Luck sound like a historical novel and in a sense it is—the world is out there, impinging on the Langdons and their five children. Some go to war. Some get involved in the Red hunts of the 1950s. The Great Depression lingers on the outskirts of the narrative, but although Smiley names each chapter with the year in which the events take place, the farm itself exists in a sepia tinged bubble of nostalgia, relatively unscathed by the tumultuous events of the world outside.

And that would be my only criticism of Some Luck so far. Eric Hobsbawm called the twentieth century 'without doubt the most murderous century of which we have record, both by the scale frequency and length of the warfare which filled it…but also by the unparalleled scale of the human catastrophes it produced.’ Yet through all this, the Langdons live their lives in relative peace and quiet. Tragedies happen, but of the kind you would expect in any family at any point in time. Transplant the events to 1820 and the narrative wouldn’t require much of an edit. But that may change. Some Luck draws to a close in 1953 and it may be that as modern times approach—the Vietnam war, the summer of love, the age of the internet—Smiley’s people will find the world harder to escape.