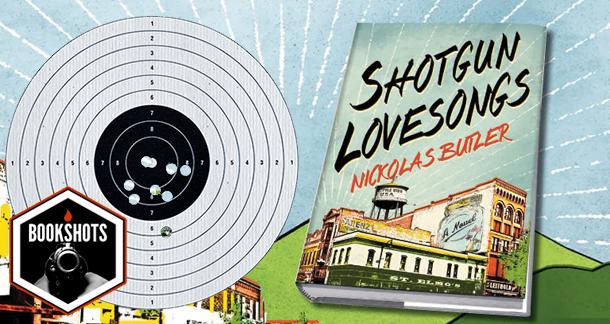 It would be unfair of me to blame [Butler] for the blurbs and the overcooked publicity, which give the impression that within these covers lies a book with the kind of Pulitzer-heft of Jane Smiley’s 'A Thousand Acres'.

Three Weddings and a Shotgun

Cold Mountain by Charles Frazier, A River Runs Through It by Norman McLean, and anything at all by Nicholas Sparks.

Kevin Costner in his Dances with Wolves phase

Little Wing (catch the song ref) Wisconsin sounds only fractionally different from the small Norwegian farming community in which I live. The beer is cheaper in Wisconsin, but here in Norway no one bores me with their marital problems. I think I’ll stay put.

America, I think, is about poor people playing music and poor people sharing food and poor people dancing, even when everything else in their lives is so desperate, and so dismal that it doesn’t seem that there should be any room for any music, any extra food, or any extra energy for dancing.

Remember Forrest Gump? Admittedly I look nothing like Tom Hanks, but in many other respects Forrest and I have much in common.  We both sit on park benches and alarm strangers with our life stories. We would both marry Robin Wright in a heartbeat. We both believe life is a box of chocolates and that you never know what you are going to get.

See, I have no problem with opening a book and not knowing what I am going to get. What I do have a problem with is selecting a nice chewy toffee – something with body, something with a little bite – and putting it in my mouth only to discover that instead I am eating a soft-centered violet cream.

Shotgun Lovesongs is by no means a bad book. Butler turns a good phrase. He uses pretty imagery. His ability to detail small-town American life would give Stephen King a run for his money, right down to the exact shade of paint on a John Deere tractor and the brand of boots worn by the hero and really, it would be unfair of me to blame him for the blurbs and the overcooked publicity, which give the impression that within these covers lies a book with the kind of Pulitzer-heft of Jane Smiley’s A Thousand Acres. It would be unfair, because Butler has no control over any of that. He wrote the book, the publishers sell it. This is how it works.

What has Butler written, if not A Thousand Acres? A romance, not one as sickly sweet as the kind Sparks produces (so OK, I redact that comparison), but one which conceals at its heart a sentimental, mushy centre. Four friends reunite in their childhood town. One, Leland, has made it big as a musician. Two others - Hank and Kip – have married. The fourth, Ronny, mildly brain damaged after a rodeo accident, bumbles along under the care of the other three. Their loosely plotted comings and goings, arranged around three weddings, fill out the story. Marriages fail, marriages survive. Friendships are broken and mended. Babies are made. A jar of pickled eggs gets shot. In a sudden twist of fate (Major Spoiler Alert) everyone lives happily ever after. It’s soft-focus and sepia and it says something about the overall tone that the lyrics which formed my mental soundtrack as I read weren’t Iver’s plangent vocals, or even the down home simplicity of Woody Guthrie, it was the words of McLean’s American Pie. And that was well before Butler has Leland sing them.

Like in the song, there is a yearning here for a simpler time, for good old boys, for pink carnations and pickup trucks, for rebels without causes. Shotgun Lovesongs evokes the healing power of homesteads and farmland, but healing is nothing without wounds, and the weakness, if there is one, is that the suffering of Butler’s characters is small scale, unremarkable and mostly self-inflicted, the kind that can be solved with a frank apology and a couple of beers, which is in fact (second spoiler alert), exactly what happens.

Bookshelves, like life, are boxes of chocolates, except now that you’ve read this review, you know what you’re going to get. If you like violet centres, this candy is for you.

Bookshots: 'A Bloom of Bones' by Allen Morris Jones