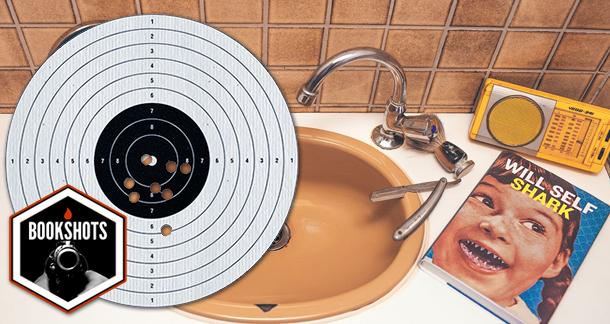 A journey of language, of character, of unsettling fragmented narratives, of tricks, twists and turns.

Will Self, the man behind works such as The Quantity Theory of Insanity, Great Apes and Umbrella, which was shortlisted for the Man Booker Prize for Fiction in 2012. Shark is Self's eleventh novel.

Building off (or building to?) the events in Umbrella, Shark again follows the exploits of psychiatrist Zack Busner, a recurring character in Self's literary canon. Busner is running Concept House, some sort of experimental psych ward where patients aren't treated with psychiatrics, per Busner's anti-psychiatric leanings. I can't tell if they're being treated at all, to be honest.

One Swam Under the Cuckoo's Nest

The always antagonizing Zack Busner, a psychiatrist who hates psychiatry.

A psych ward with no psych, with this cast of characters? Yes, please.

In the inkiest, dankest hours of the suburban night, when the rails at the end of the garden had ceased their electro-hum, it was this canniness that Busner suspected was indicative of the deepest and most dreadful truth about the Creep, namely, that, far from being the most seriously disturbed of the Concept House's residents, he might not be disturbed at all!

Like Self's previous novel Umbrella, Shark is told in a stream-of-consciousness style that changes time and place and levels of sobriety and point-of-view, although I'm not sure about the latter. And that's fine. I don't have to be sure, and neither do you. That's most of the fun of reading Shark; it's not hard to read, but it also is — in a good way.

Shark's waters are populated with a bloody good cast of characters, namely Busner's patients: the wholly immature Podge, a woman who acts and thinks like a baby; Christopher Titmus, an aliens-are-coming loon; Michael Lincoln, a war hero and Christopher's adopted father; Genie, a drug addict; and Claude Evenrude, a.k.a. The Creep, Busner's pyschiatric Golden Ticket and the most unreliable narrator you'll read this year.

The Creep is easily the most enjoyable part of Shark. He was on board the USS Indianapolis when it was sank by a Japanese sub in the summer of 1945 and may or may not have helped navigate the nuke that leveled Hiroshima. He meets Busner decades later, in 1970, and their journey together at Concept House begins.

Your journey, as a reader, never ends, however. Good luck following along with the "plot"; there isn't one that's easily definable, far as I can see. But that's what reading Will Self is, a journey from beginning to end, a journey of language, of character, of unsettling fragmented narratives, of tricks, twists and turns. Shark will latch on to you and pull you under if you're not careful — and that's a good thing.

Joshua Chaplinsky from New York is reading a lot more during the quarantine November 4, 2014 - 2:37pm

This one's in the pile. Do you think it matters that I haven't read Umbrella?

No, I don't think it matters. It stands alone. Only if you want to completely follow Busner's exploits does it really need your attention.

Joshua Chaplinsky from New York is reading a lot more during the quarantine November 20, 2014 - 1:18pm

This book is confusing but engrossing. The way Self puts words together makes me want to smash my fingers with a hammer. He's that good.