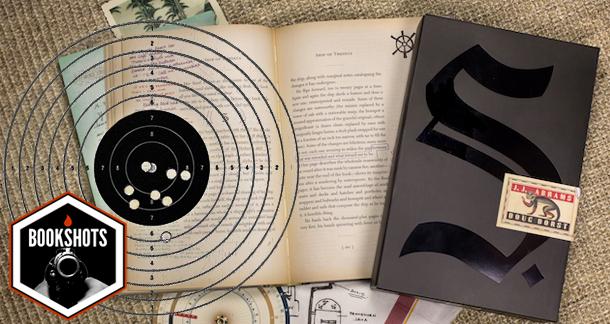 S. was conceived by filmmaker J.J. Abrams, creator of television properties such as Alias, Lost, and Fringe, and director of feature films such as Super 8, Star Trek, Star Trek Into Darkness, and the forthcoming Star Wars Episode VII; and written by author Doug Dorst, whose previous work includes the novel Alive in Necropolis, runner-up for the 2008 Hemingway Foundation/PEN Award.

S. isn't as much a book as it is an amalgamation of mindfucks.

A college girl picks up a book left behind by a stranger in the school library where she works. Inside the book, the stranger has made notes in the margins about the book and the enigmatic author behind it. She leaves some notes of her own before returning the book, which prompts further correspondence between the two. This leads both of them down the proverbial rabbit hole, chasing the mystery behind the book, its author, and their own lives.

Lost on the Fringe with an Alias

(No, seriously. This is actually a great new title for it.)

Jennifer, a college senior struggling with the prospect of graduating and not knowing what will come next; and Eric, a grad student obsessed with a mysterious author, racing against his old college professor to uncover the mystery.

Interesting question here, strictly because of the nature of the book (there's little to no physical characterization of Jen and Eric). Regardless, I'd cast Emma Watson (the Harry Potter films) as Jen and Aaron Taylor-Johnson (Kick-Ass) as Eric. Those are probably terrible choices.

Honestly, if I had to describe the setting, I'd say "in a book." And who doesn't want to live there?

Without intuition, the world becomes a flat place, a stunted place. A place where change is impossible.

I should have lobbied for a revised review method, but since Bookshots is a revised review method — and because I want to be on the LitReactor softball team (there is a softball team, right?) — I stuck with the format, which was, as you may have noticed, difficult to fit into and around this book. So this verdict part should be the easy part, right?

Eh, not so fast. Nothing about S. is easy.

S. turns out to be similar to the Lost series finale in terms of plot resolution, but ultimately it's not about how the story ends — it's about how we got there.

If you haven't heard about, seen, or read this book yet, here's a brief primer: S. isn't as much a book as it is an amalgamation of mindfucks.

There are, essentially, three stories unfolding throughout S. The first: a standalone novel called Ship of Theseus, written by the mysterious V.M. Straka and translated by the just-as-mysterious F.X. Caldeira. Theseus is Straka's nineteenth novel, and it's about a man known only as S. who's been shanghaied onto a ship for lord-knows-why.

The second: the mystery of Straka and Caldeira and just who the hell these people really are, which actually unfolds through the third story: that of Jen and Eric, who exchange handwritten notes in the margins of Eric's stolen-from-a-library copy of Theseus about Straka, Caldeira, and their own pasts, presents, futures, and fates.

That's the plot in a very small, not-as-convoluted-as-it-could-have-sounded nutshell. On that note of plot, I will say that Dorst's narrative in Theseus leaves a little to be desired. I haven't read his first novel, Alive in Necropolis, but when I saw it was nominated for the Hemingway/PEN Award, I raised my expectations. They were not completely met.

But maybe they weren't supposed to be, because S. isn't about the narrative in Theseus, even though it totally supports — mirrors and mimics are other suitable words — the overall story of Jen and Eric. It's about the experience of reading it. It's about the power of the written word. It's about handling a physical, tangible thing in a world full of digital, intangible things.

Aside from the margin notes, which include different colors of ink that will test your patience and decision-making, the book is full of inserted ephemera: postcards, photographs, a map drawn on a napkin, a freaking wheel with coordinates on it that acts as a decoder of some sort, all of which add more mystery to the story. Just looking at it, it's an astounding publishing feat, to be honest, and this is easily the most impressive aspect of S.

What else would you expect from Abrams, though? You know what you're getting into when you sign up for his class. And it is a class, believe me. It's a graduate level lesson in skullduggery and how many times you can make someone scratch their head in utter confusion throughout 472 pages.

But the most important lesson is this: the book in physical form may be an old, musty, stale idea, but it's still one of the most intimate and satisfying experiences one could have, even in a world full of hashtags and character limits, where high school freshmen read Shakespeare on touchscreens.

S. turns out to be similar to the Lost series finale in terms of plot resolution, but ultimately it's not about how the story ends — it's about how we got there. That's what every story is about, the journey from here to there.

But you need to immerse yourself in the experience. If you don't fully intend to participate — you're as much of a participant in this as Jen and Eric — don't put this on your Christmas list. As much as there is to absorb between the front and back covers (including figuring out just how and when to read those damn handwritten notes) there's more to S. than the physical item you buy on Amazon, he said with a wink.

If you let Abrams and Dorst guide you, in the way you're meant to be guided, S. turns out to be pretty damn fun.

So when you say your expectations weren't met by the narrative in the Theseus portion, does that mean when Dorst has to tell a story straight, the limits in his ability start to show?

Because pyrotechnics apart, a writer has to be able to write. Right?

Joshua Chaplinsky from New York is reading a lot more during the quarantine December 10, 2013 - 10:57am

I hated the end of Lost (although I blame Lindelof for that), but still want to check this out. Can't... resist... ephemera... meta-narrative... Danielewski comparisons...

Dino Parenti from Los Angeles is reading Everything He Gets His Hands On December 10, 2013 - 12:50pm

Josh: Agree with you about Lindelof. I also blame him for screwing up Prometheus.

Cath, yes, absolutely. But the narrative in Theseus isn't the story. It's an interesting tale, but I wasn't blown away by it. I think it exists more to serve the story in the margins.

Josh, read it. Now. Stop being a douche.

Dino Parenti from Los Angeles is reading Everything He Gets His Hands On January 5, 2014 - 12:12pm

Got a book review up for it on Pantheon Magazine.

Although people always namecheck House of Leaves when authors do fun stuff with the text, there are others who have done interesting work in this area.

If you like things like this, you might want to take a look at Milorad Pavic. He's a Serbian author with several books translated into English. Landscape Painted with Tea is a mythic novel that also happens to be a crossword puzzle. Dictionary of the Khazars is a three part, two book novel in the form of a dictionary detailing the conversion of a nomadic tribe to (depending who you ask) Christianity, Judaism, or Islam. Each religion has their own version of the dictionary (often with different names for the same characters, and different interpretations, or even stories, of their actions), and there are two versions of the book, a "male" and a "female," which differ only by one sentence (which is up to the reader to find). If that sounds like your kind of thing, definitely check it out.

Thanks, Scott. I'm all up on Milorad's shit on Amazon right now...