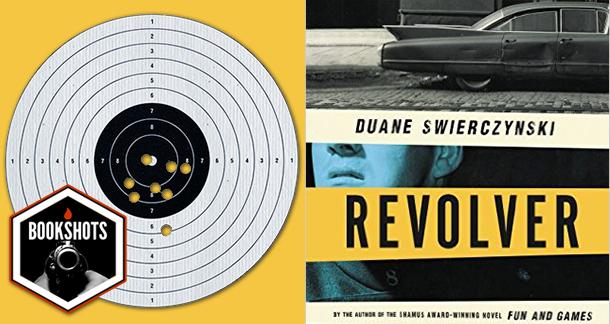 The man with the $1000 handle (And a whole bunch of novels and comic books attached to it), Duane Swierczynski.

In 1964, police officers and partners Stan Walczak and Michael Wildey are gunned down in a beer joint. Over the following decades, Stan’s son, Jim, and granddaughter, Audrey, become obsessed for one reason or another with the case.

The Weight Of Our Fathers

Audrey Walczak, Jim’s adopted daughter, drunk, brilliant slacker, and obsessed with finding her grandfather’s killers, but mostly because she doesn’t want to get kicked out of forensics school, and solving the case is a sure fire A.

All the male leads (Yes, even the black ones) will be played by John Hawkes and all the female supporting cast will be played by Ruth Buzzy. Other than Audrey, that is. She would be played by Aidy Bryant, and mostly because I want to see that big, beautiful woman with a sleeve of tattoos knocking back Bloody Mary’s like they were water. (Remember, kids, Books = Using your imagination. Create your own mental pictures of the characters. You don't need me to put them there for you).

Modern day Philly, yes. Although it’s a bit cold for me, but it's a cool city nonetheless. Philly in the past, FUCK. NO.

"That’s his dick.”
“Say what?”
“Swear to God,” Wildey says, with the conviction of a man testifying under oath, “that guy on the corner is waving his dick around.”

The reason why I fell in love with crime fiction was for two reasons: Crime fiction is basically the modern equivalent of social realism (yes, believe it or not even cozy mysteries aren’t afraid to address issues such as race and classism), and the second was because so many crime writers aren’t afraid of utilizing multiple POV’s and tying them all deftly into the same storyline. I know, I know, more than a few writers are more willing and capable of doing this, but crime fiction novelists seem to excel at it: Ellroy, Peace, Winslow, Allan Glynn, Gillian Flynn are all masters of taking the reader through time and the eyes of multiple narrators and creating some serious magic.

The one writer I’ve wanted to see tackle a multi-generational and multiple narrator novel along these lines is Duane Swierczynski; mostly because he’s written about some pretty nutty conspiracies in his past novels, but all of them have taken place in present time and are told from a single perspective.

But when he’s inserted another POV other than his primary narrator, these random interjections are more often than not the most interesting chapters in his novels. Not that he doesn’t create highly readable and engaging protagonists, it’s just that he manages to add a lot of meat to his one-off characters (typically the guys who take a bullet or have their heads exploded not long after they’re introduced). And this is what Swierczynski has managed to do with his his thirteenth—albeit only his third straight crime story—novel, Revolver.

This multi-generation/protagonist novel is borderline epic in scope and should appeal to readers of hard-boiled crime fiction and traditional mystery readers alike. The three main narrators—three generations of Philadelphia law enforcement—okay, only two, really, Audrey Walczak is studying to go into forensics, but she’s kind of screwing that up with a healthy dose of sarcasm, alcoholism, and simply not giving a fuck—are believable and likable (they're fictional police, so they all kind of carry around a bit of a scumbag vibe) enough to keep the reader ripping through pages.

Much like Swierczynski’s previous novel, Canary, he seems to be really embracing the traditional crime narrative, which is great for those readers who’ve shirked off this author in the past due to his over the top conspiracy thrillers (although, these were the books that got me hooked on him in the past). Long story short, Revolver may very well be Swierczynski's strongest novel to date—and one of my favorites of 2016, so far— at least until he releases the next one.

"Crime fiction is basically the modern equivalent of social realism (yes, believe it or not even cozy mysteries aren’t afraid to address issues such as race and classism), and the second was because so many crime writers aren’t afraid of utilizing multiple POV’s and tying them all deftly into the same storyline".

Great observations. The best crime fiction uses a crime as a reason to peer into other people's lives and put society under the microscope. And I don't know exactly why, but there's something incredibly satisfying about a story that weaves the lives of mutiple characters and plot lines together.