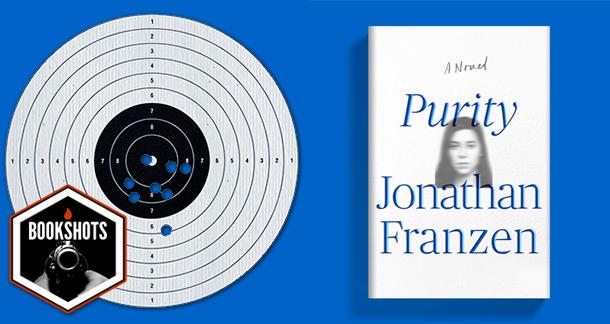 The Great American Novelist, Jonathan Franzen, who is known for The Corrections, Freedom, and, more recently, making a flippant comment about wanting to adopt an Iraqi War orphan to understand young people.

. . . its controlled plot, ambitious narrative, and insightful comments on investigative journalism and modern disconnect deliver on the hype.

Purity (Pip) Tyler graduates college $130,000 in debt and takes a paid internship with the Sunshine Project, a political project fronted by an infamous hacker-radical, Andreas Wolf, with the prospect that he will relieve her debt and find her estranged father.

Cultural criticism with a Dickensian twist.

Pip, a self-loathing 23-year-old who has an unhealthy relationship with her overbearing mother, and most people.

Andreas, a hacker born out of Stasi-era East Germany whose claim to fame comes from leaking classified documents over the internet.

Pip: Aubrey Plaza (if only because of the cover)

Of all the various settings, including Colorado, Bolivia, and Germany, the Bay Area wins.

Only once, and only because I was very young, could I have merged my identity with another person’s, and singularities like this are where you find eternity.

What would you do for money? For 2.5 million dollars, people on Reddit said they would amputate their own limbs, keep secrets, or kill as many strangers as someone wanted them to (these are points aside from the various jokes about dick sucking and Klondike bars).

Large sums of money are tossed at the characters in Purity, and its sources are always questionable. Andreas Wolf lures Pip to South America by offering to relieve her student debt, and Wolf’s longtime friend, Tom Aberant, accepts two million dollars from his ex-wife’s wealthy dad to form his dream business venture. Murder also happens, but not in exchange for money. And nothing is pure.

The novel reflects on timely viral culture like the Occupy movement and Wikileaks, all fueled by the usual Franzen fare—alternating narratives, dysfunctional families, cultural criticism, self-loathing. (This is not a novel for those who fume at Franzen’s Internet crusades or notes on feminism.) Franzen has a sense of humor, though. He even has fun mocking himself. In a rant that echoes literary blogs everywhere, his character, Tom, mentions a certain “Jonathan Savoir Faire” (Safran Foer, no doubt) and unleashes:

'So many Jonathans. A plague of literary Jonathans. If you read only the New York Times Book Review, you’d think it was the most common name in America.'

The spectacle is, of course, the real reason to read the first Franzen epic in five years. This novel isn’t The Corrections, but its controlled plot, ambitious narrative, and insightful comments on investigative journalism and modern disconnect deliver on the hype.