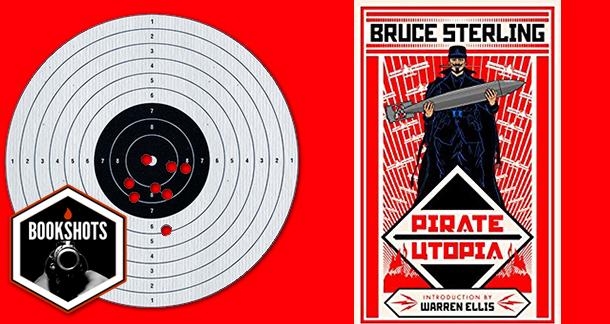 When you have an oxymoron for a title, there's really no way to predict what awaits you, and Pirate Utopia exceeds all expectations.

Bruce Sterling, better known as one of the founders of the cyberpunk movement.

An insane half-deaf pirate engineer utilizes Futurism and torpedoes to blow shit up and fight the good fight.

The Minister of Vengeance Weapons

Lorenzo Secondari — A Pirate Engineer, deaf in one ear after dying during the Great War. But don’t worry, he was promptly reanimated.

The Prophet — Leader of the Desperates.

The Ace of Hearts — The Prophet’s right-hand man.

Harry Houdini — The Man Without Fear.

The only people fit to cast this hypothetical film are the Coen Brothers.

A little Italian town called Fiume (which would eventually go on to become modern-day Rijeka) in the 1920s. Pirates and engineers galore! This town is an anarchic torpedo of insanity. Hell yeah I’d want to live there. Although I probably wouldn’t survive very long.

Here are four, one of which works by itself, while the remaining three only becomes magical once connected:

Tarzan was a superhuman anarchist, but since he lived in a jungle, he did not have to smash the State.

When he blandly told the rich that they were welcome to work as laborers within their own factories, they gazed at him in utter horror. They despaired and ran away. Then they plotted reprisals.

This is a very short book occupied by an impressive cast of characters—most of them grabbed straight from history, although used in ways you might not entirely expect. This is a Futurism novel that looks at the past rather than the future. It’s an alternate history clusterfuck of brilliant, whacky world-building and hilarious, bizarre characters. I am not going to discuss the plot, but I will tell you that, in the world of Pirate Utopia, Hitler passed away while saving someone’s life in a bar, Lovecraft works not only for Houdini, but is also a member of the U.S. spy delegation—oh, and Mussolini has evidently been shot in the cock, which is of course wonderful. This is a book about piracy and Futurism. Building a world while stealing everything in it. When you have an oxymoron for a title, there's really no way to predict what awaits you, and Pirate Utopia exceeds all expectations. Also, make sure you stick around afterward for the impressive special feature essays and interview with Sterling. They’ll help you make sense of what the hell you just read.

Bookshots: 'Bats of the Republic' by Zachary Thomas Dodson