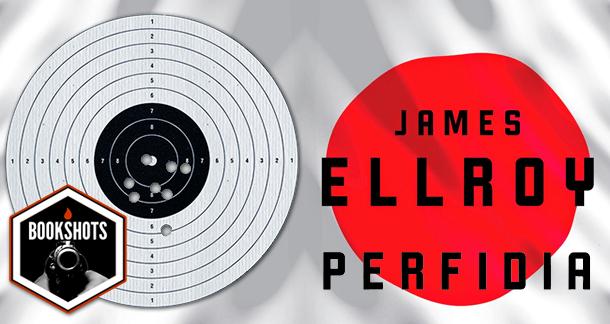 Ellroy reintroduces characters from his previous novels—some major, some blink-and-you'll-miss-them minor—and mixes them all together, in a low-down dirty gumbo.

Nobody puts Ellroy in a box. His plots are too large, too sprawling. The bulk of Perfidia takes place after the bombing of Pearl Harbor, and centers around the mysterious murder of a Japanese family. Everything snowballs from there. We're talking a massive, bloody snowball of police corruption, severed limbs, and civil rights violations.

This is a tough one. Scott Haze for Parker. Dude is a powerhouse. He doesn't look much like the real-life Captain, but after Child of God, I'd watch him in anything. A young Toshiro Mifune as Hideo would be perfect, if he were alive (and young). Can we Benjamin Button James Cromwell? Because as far as I'm concerned, he is Dudley Smith. For Kay Lake, anyone but Scarlett Johansson. She was awful in The Black Dahlia. How about Natalie Dormer, who plays Margaery on Game of Thrones? She's the closest thing we've got to a modern-day Veronica Lake, who would be my ideal choice if this were the 40s.

Heeeeeeeeeeeeeell no. No one is safe in Ellroy's LA, not even your garden variety straight white male.

Ellroy doesn't write fancy sentences to impress. He writes novels. For him, language is but a tool. Still, this sums things up nicely:

Here we were in Los Angeles. We were at odds with one another and afire with crazed duty. We were as one and bound by a terrible allegiance in the time of Pearl Harbor.

This is the first book in a proposed second LA Quartet, which aims to unite the original series and the Underworld USA trilogy and turn them into "one inextricable 11-novel whole." It's an ambitious undertaking, especially considering Ellroy is 66 years old. If he pulls it off, he'll have produced an interconnected body of work that transcends genre and spans thirty years of American history. If he doesn't (not to doubt his capabilities), well... he always said he hated closure.

Those familiar with Ellroy's oeuvre know what they're getting, here. Rapid-fire prose and a plot like a thicket. Also, buckets of racism. At 700 plus pages, it's a lot to digest. His detractor's might contend that it's repetitive, even boring. His fans are already lavishing it with praise. They are the sycophantic terrier Chester to Ellroy's bulldog, Spike. The two of them roam the streets, stalking the Sylvester that is the publishing industry. Somewhere in this analogy, an escaped panther lurks, but I'll be damned if I know what that represents!

The main point of interest here is the way Ellroy reintroduces characters from his previous novels—some major, some blink-and-you'll-miss-them minor—and mixes them all together, in a low-down dirty gumbo. Some connections are more subtle than others. A few border on contrivance. Is Ellroy trying too hard to connect the dots? There was one in particular—and I'm not going to spoil anything here—that was introduced so matter-of-factly, with so little fanfare, I thought maybe I had glossed over it in his earlier work, or suffered a massive head injury and forgot. The fact that this connection exists, but is never referenced in the later (chronologically) books...  It'll be interesting to see how readers react.

Other than that, it's business as usual—the business of masterful storytelling on an enormous scale. Nobody does it like Ellroy. Grok its groin-grabbing gravity.

Awww so looking forward to getting my dirty mits on this

My review would have been better.

Joshua Chaplinsky from New York is reading Stories of YOUR Life September 11, 2014 - 5:11am