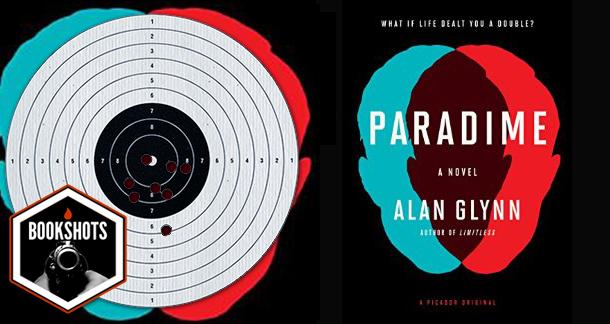 'Paradime' goes for broke on the raw paranoia and claustrophobia and starts making your skin crawl from page one.

The dude who wrote Limitless, and three of the ballsiest socio-political thrillers of the last twenty years.

Danny Lynch is a broken Iraqi vet and longtime line cook. Danny was recently fired from a contract position in Afghanistan for witnessing a food riot and the violent death of a co-worker (By the way, the co-worker death scene is easily one of the most disturbing, realistic death scenes I’ve read in a very long time.), and daring to question the actions of the company. Now he’s back in NYC living with his OWS girlfriend in desperate need of a job and a fistful of anti-depressants. To make matters worse, the company he formerly worked for is denying him his last check.

Out of desperation, he contacts the company, sits down for a drink with the company’s fixer and not only gets his check, but is hooked up with a job doing food prep at a successful three-star joint. One night as he’s daydreaming at work, he spots an utterly gorgeous woman in the dining room of his restaurant. When he’s finally able to take his eyes off of her, he catches a glimpse of who she’s eating with and it’s a guy who looks exactly like him. After seeing his doppelganger a few more times, he becomes a tad bit obsessed, does some research and discovers his double is ultra-successful venture capitalist, Teddy Trager. Obsession, madness and hilarity follows suit!

Pretty much anything by Graham Greene. Also, if you liked Denis Villeneuve’s adaptation of Enemy, or Orphan Black, this is going to be right up your alley.

I would resurrect the legendary Benny Hill for this role! No, I’m joking. It’s a first person narrative, so you could pretty much cast anybody. But for the sake of the of review, I’ll say Armie Hammer.

NYC? Sure, why not? But only for six months and not for a second more.

This really could be me.
In some fucked-up parallel universe.

For me to enjoy a thriller, it has to contain three elements: Paranoia, claustrophobia, and action.

Here’s the big issue: most modern thrillers will only dip their toes into the first two and jump head first into the third—and for me, the least important aspect—and scrub themselves raw with car chases, explosions, and out of control gun battles. And I get it, I do. People dig action, they want the big climax over and over again without any of the foreplay to get the motor running. I mean, there is a reason why the Bourne series and the modern incarnation of James Bond still rake in billions of dollars at the multiplexes. You know, other than a complete lack of original ideas.

But this is why I’m a fan of Alan Glynn (I wrote about his previous books right here), there’s a subtle build up and he typically teases and sets the tone first before detonating a nuclear device in your face. Which, by the way, doesn’t happen in his latest, and second standalone novel, Paradime.

If anything, Paradime goes for broke on the raw paranoia and claustrophobia and starts making your skin crawl from page one. Glynn’s narrator, Danny Lynch, is basically walking, talking dread. This guy has lived through and seen so much that he’s never going to be able to live a normal existence even if he was parked on a therapist's couch every day for the next twenty years. He’s seen some shit that you just can’t un-see and it pollutes and influences him to the point of ruin.

Much like his previous novels, the overall tone is noir-ish without going full blown David Goodis; there is some hopefulness and sunshine breaking up the gloom and doom, but it’s pretty fleeting. While I won’t say Paradime is my favorite of Glynn’s novels—Bloodland occupies that spot—he is able to take an incredibly well-worn plot device and make it his own. The fact is, even though the plot isn’t the most original, Glynn’s skills as a storyteller still makes Paradime 99% better than most of the thrillers currently being published.