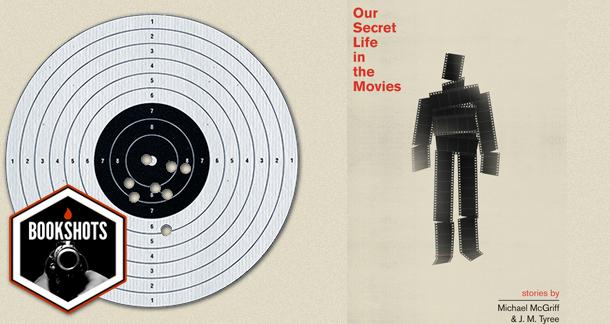 'Our Secret Life in the Movies' may very well hit you right where you live – as long as you live in your head, and your head is in severely poetic disorder.

…to get high and make up poetic shit with your equally baked friends.

Two imaginary versions of the authors when they were kids

Where? In the authors' heads? Living in my own is tough enough as it is, thanks.

The witch didn’t look sinister, but I got the sense that she was a little bit concerned about the way I was growing up.

I wanted to love this book. Really – I did. The authors and I have a lot in common: a mental-illnesslike love of movies and a taste for grotesque Americana. One of them (J.M. Tyree) and I both write for Film Quarterly. But it turns out that I need coherent narrative a lot more than they do, not to mention a much clearer connection between the films and the fantasies they spark.

Ridley Scott’s Blade Runner, for instance, inspires a snippet called “The Man Who Married an Egg,” the first sentence of which is, “After my father leaves us, he buys a dozen large eggs and takes a perfectly brown, perfectly egg-shaped egg for a wife.” Is it wrong of me to ask what this has to do with Blade Runner? Admittedly, I haven’t seen Blade Runner in years, but I don’t recall any egg wives in it.

The stories they tell are funny, strange, lurid, imaginative, unlikely, personal, smart, articulate, involving, and unnerving. The authors write beautifully. The tales shine. There is just no need to tie them into the films; it's a gimmick, and it doesn't work.

I didn’t get this book at all, but that’s hardly to say that you won’t. Our Secret Life in the Movies may very well hit you right where you live – as long as you live in your head, and your head is in severely poetic disorder.