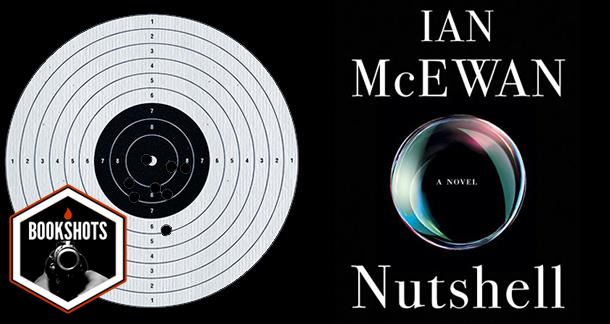 I found it distasteful, intellectually insulting, and its prose painfully cringe worthy.

Trudy wants to kill her ex-husband, John. So does John’s brother, Claude. They drink a lot and plot John’s murder. The only witness to their plotting, John and Trudy’s unborn son.

The Breast By Philip Roth

Trudy: Bitter ex-wife who acts and thinks like a man in his mid-sixties

Claude: Former brother-in-law and current lover, who also acts and thinks like a man in his mid-sixties.

Unborn baby: Our narrator, who just so happens to act and think like a man in his mid-sixties.

Benny Hill. Yes, even the fetus. Because, as I’ve mentioned, all of the characters are men in their mid-sixties.

London? No, that’s way too much city for me. Particularly the grimy little corner of it McEwan portrays in Nutshell.

Oh, there isn’t a favorite sentence. There’s only cringe worthy gems like this one:

So here I am, upside down in a woman. Arms patiently crossed, waiting, waiting and wondering who I’m in, what I’m in for. My eyes close nostalgically when I remember how I once drifted in my translucent body bag, floated dreamily in the bubble of my thoughts through my private ocean in slow-motion somersaults, colliding gently against the transparent bounds of confinement, the confining membrane that vibrated with, even as it muffled the voices of conspirators in a vile enterprise. That was in my careless youth …

Mind you, this is the opening of the novel. The sixty-year-old baby goes on like this for another 198 pages.

I think when authors with dozens of novels, accolades, awards, and millions of dollars in sales under their belt hit a certain age, they need to hire someone to read their novels. Now, I’m not talking about their long time agents or editors, I’m talking about just some random person who likes to read. Someone they can hand their latest manuscript to and expect nothing but the straight dirt. Someone who can say, ‘You know what, that was awesome’ or ‘Dude, seriously, you need to work on this a little more.’ Or, better yet, ‘This is awful, you need to stick this in your desk and never ever, ever, ever let anyone see this.'

I say this because, let’s face it, writers are fairly gentle creatures who tend to become a little full of themselves, especially when they’re highly respected and their agents and editors—You know, the people who are actually paid to tell an author what they’re writing ain’t so hot—are too intimidated to let the author know that their latest masterpiece is a steaming pile of crap.

Which is what somebody—anybody—should have been telling Ian McEwan regarding his latest novel, Nutshell.

In the ten some odd years I’ve been reviewing, it is rare for me to ever slam a book. To be honest, I just don’t have it in me. I know how difficult it is to write a novel, so if I run across a book that I just don’t like, I won’t review it. But in the case of Nutshell, I made an exception because I found it distasteful, intellectually insulting, and its prose painfully cringe worthy. The plot is ludicrous, the characters are intensely unlikable, and while I find the idea of writing from an unborn, 30-week-old-baby’s perspective to be an interesting exercise, that’s all it should be, an exercise. It should be something you have tucked away in a notebook never to be seen by anyone else’s eyes but your own.

What it shouldn’t become is a two-hundred-page novel that people spend their hard earned money on.