There is a lurid pulpiness of a Fawcett Gold Medal paperback at [Nothing's] core; a thriller-like structure which drives the narrative and fills it with an encroaching dread like a James M. Cain novel.

Montana is burning to the ground and so are the young and desperate souls of Missoula.

James: rich boy wannabe hobo in search of the legend of his long dead father.

Missoula, Montana….maybe when I was in my twenties, but now, no.

While I watched and swam in place branches brushed the water, leaves touched the water. The train screamed long, and then again. Sounding good like a forgotten memory, like The West was real.

Baby boomer and Gen X bloggers and mediaheads use the word like a curse. They spit it out of their collective mouths like an underdone piece of chicken, claiming that the post-internet generation is nothing more than a bunch of unmotivated, socially disconnected group of tech junkies with the spiritual and intellectual attention span of a fruit fly.  I’ve even muttered it a time or two myself when I’ve witnessed one of the the under thirty set with their nose buried in their phones, absorbed in their internal world, oblivious to what’s going on around them.

I’ve revised my opinions of the vast majority of millennials, because, let’s face it, older generations have always been critical of the newer. They’ve always decried how vacuous and petty their culture is. They’ve demonized and called it drivel, mostly because they don’t understand it, or they’re so scared of changing styles and trends. They would rather derail and criticize than face the fact that the the music, art, literature, ideas, etc., of their generation is now as outdated as a rotten carton of low fat yogurt.

My change in attitude towards millennials is simple empathy. How would I be if I was as ultra-connected with others? Would I have my head seemingly buried in the sand of my own concerns and realities? Part one of my answer is that I would be, and part two is that I have been. The foil of youth is self-centeredness; believing that your world is a bright, albeit small sun which the universe crowds around. Social connection is what matters most and the greater world is simply white noise.

At its heart, this is what Anne Marie Wirth Cauchon’s exceptional first novel, Nothing, was about for me: Our fragile human connections. Our desire to make and maintain them, no matter how desperate or ridiculous they make us feel.

Nothing’s protagonists, James and Ruth, epitomize both ridiculousness and desperation to a T. James is searching for his ghost of a hobo father, twenty-years dead and most likely mentally ill when he was alive. James has built up a legend of manliness and individuality from the letters the dead father wrote to James’ mother while she was pregnant. Letters which reveal little or nothing about the man’s personality, which enables James to paint broad, romantic strokes of the possible mysteries surrounding his father’s death.

Ruth occupies desperation. Her need for acceptance from her pretty white trash best friend, Bridget, errs on the side of pathetic obsession. Ruth’s convinced herself that Bridget completes her as a person, and resents her for making her feel that way; a resentment so strong it resembles a burning hate. The relationship is poison for Ruth, but for Bridget their connection is seemingly meaningless, like she’s only spending time with Ruth until her real friends show up.

But it was the smaller connections both James and Ruth make throughout the novel that fascinated me. From the dreadlocked trust fund trash who brings a new born baby to a rave to wild-eyed, rail hopping gutter punks to the town of Missoula itself. The bigger picture of the background noise and chaos that James and Ruth occupy is as much a part of the novel as they are, and perhaps even overwhelms them for the reader.

If I’m making Nothing sound far more heavy handed than it is, I apologize. While Wirth Cauchon’s writing and characters are very intense, there is a lurid pulpiness of a Fawcett Gold Medal paperback at its core; a thriller-like structure which drives the narrative and fills it with an encroaching dread like a James M. Cain novel. We know James and Ruth are doomed from the word go, and yet you can’t help but stare at them like a bloody three car pile up.

While there is a certain self-consciousness to Nothing—but can’t you say that to a certain extent of all first novels?—it tends to add to the atmosphere of the book. Overall, I was impressed with both Nothing and Wirth Cauchon, and I’m anxious to see what she produces next.
Highly recommended.

Sounds great. Just got this one in the mail. Can't wait to read it.

Joshua Chaplinsky from New York is reading Stories of YOUR Life December 26, 2013 - 7:49am

Makes me wish I kept that ARC for myself.

Makes me wish I'd offered to review it before Keith did. 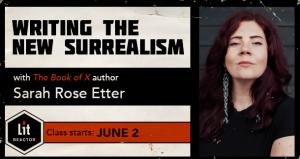 Learn to write from your subconscious to create the structures, characters, and symbolism that will take your stories from the everyday to the strange and surreal.