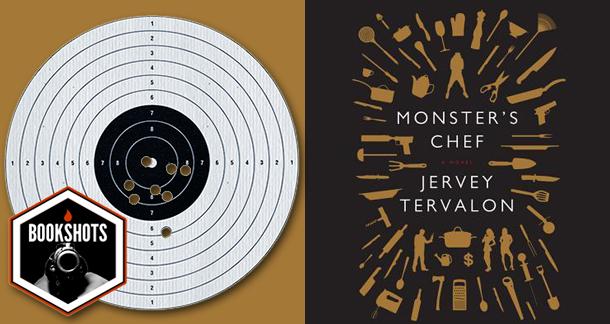 A "post-racial" pop star who bleaches his skin, has an amusement park on his property and is rather fond of young boys...haven't we heard this somewhere before?

Jervey Tervalon, author of five books, including the bestselling Dead Above Ground.

Down and out restaurateur gets a job working for a celebrity called "Monster". This nickname is an understatement.

Lonely and misunderstood, mega-star Monster is looking for a friend, especially one who will do anything for a buck.

Described as having bleached skin, straightened black hair, wide eyes like a Japanese cartoon and a soft, whispery voice—Monster's a tricky one to cast. Would he be best played by a black actor? One of another race? An actress? Any thoughts?

...Tell me this, are you experienced?

You mean in a Jimi Hendrix way?

...That's exactly what I'm saying. You've got to be down for me.

At the beginning of Monster's Chef, ex-druggie, ex-successful guy William Gibson feels like his life "was stuck between the pages of a book I couldn't wait to be done with."

Fortunately, the same can't be said about Jerzey Tervalon's fifth novel. At 125 pages, Monster's Chef promises to be a taut, breezy page-turner. And it is. We're immediately drawn into the story of Gibson, a hapless but street-smart guy who's life—and wife—were lost to drugs. When he's offered a job as personal chef to one of the world's most famous entertainers, it seems like the perfect chance to turn things around.

Sure, life is a little unsettling at Monster's: menacing and predatory staff, shadowy late-night "parties". Then there's Monster himself, a mysterious figure who begins conversations about his past with the phrase "When I used to be black..." But all Gibson has to do is keep his head down, prepare fantastic food and avoid getting too close to Monster...or his gorgeous, pregnant wife.

Wait a minute. A "post-racial" pop star who bleaches his skin, has an amusement park on his property and is rather fond of young boys...haven't we heard this somewhere before? Sure, but the strength of Monster... lies not so much in a retelling of celebrity lore as an exploration of what happens when an "average" man who has hit rock-bottom meets a superstar who's so far gone he may never stop falling.

This novel has its glitches. Gibson's obsessed with saving his marriage, but the few flashbacks of it, and references to his wife, aren't exactly convincing as to why he would bother. (In a letter attempting reconciliation, she addresses him by his surname, like a gym teacher.) There are a few threads and characters that are quickly introduced, only to disappear without a trace.

But all in all, Monster's Chef is a quick, pleasurable read, with memorable (and surprising) characters and a unflinching look into a monster's lair.

If no actor matches the physical description, just go ahead and cast Daniel Day-Lewis.  I've seen a bunch of his movies and still have no idea what he actually looks like in real life.