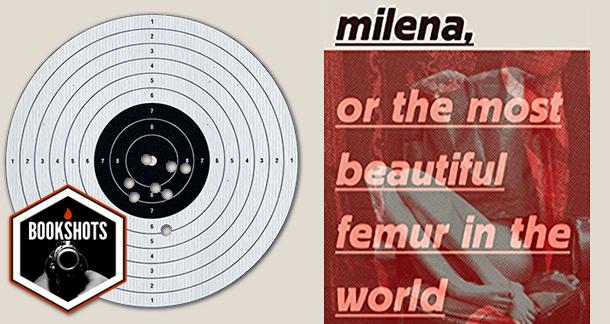 Milena, or The Most Beautiful Femur in the World

Zepeda Patterson can write, and that becomes clear with each page full of witty dialogue, fast-paced action, and devastating memories.

Jorge Zepeda Patterson, a Mexican literary giant who has been a political columnist, magazine founder, television anchor, and newspaper's managing editor. He is an accomplished nonfiction author and his first novel, Los Corruptores, was a finalist for the Dashiell Hammett Award and the one we're talking about here, which was originally published in Spanish in 2014, won the $800,000 Premio Planeta.

A powerful newspaper owner dies in the arms on his lover, a prostitute, who has a long history of abuse that starts with being taken from her country. The man was trying to protect her from her managers/owners, and she has a little black notebook that contains information that could put many powerful men and institutions in a lot of trouble. As the family and friends of the deceased try to save the woman from the mafia, things become incredibly complicated and the ties between human traffickers and high-ranking Mexican officials are revealed.

The work of Stieg Larsson, Robert Harris, and the faster/shorter works of Tom Clancy and Frederick Forsyth.

This novel juggles a lot of characters, but the main one is Milena/Alka, the prostitute. She was abducted at 16 after leaving her home in Croatia, under the impression she was going to work in a restaurant. She ends up being prostituted across southern Europe and ends up in the hands of the Ukrainian-Russian Mafia in Marbella, Spain, and then in Mexico after one of her jobs as an assassin goes wrong.

The novel takes place in a variety of countries, but mostly in Mexico. I'd love to live there, but far away from the dark, dirty worlds of politics and human trafficking.

There are plenty of great passages here, but there's one that I think signals a major change in the plot as well as in Milena:

The image rose up in Milenas's mind: a client she detested with his throat sliced open, bleeding to death in bed. She was less perturbed by the violence of the scene than the feeling of calm it produced in her. The idea wasn't completely disagreeable. She could reserve the right to limit her killing to human trash: she knew a dozen particularly cruel men whose premature deaths would leave the world a better place.

The verdict is complicated, so here's the abbreviated version in case you're the type of person who doesn't like long reviews: this is a thriller that thrills and you should definitely read it. Okay, now we can move on to the details, including the negative one.

This is a great novel. Zepeda Patterson obviously put a lot of research hours into developing a deep understanding of how prostitution and human trafficking works on a global scale. The passages dealing with how these women are treated are heartbreaking. There are also scenes that wouldn't be out of place in a hardcore horror novel. A few letters from men of various walks of life talking about their reasons for having sex with prostitutes make for some truly anger-inducing reading, especially because they contrast so strongly with the awful things happening in the narrative. Furthermore, the way the Mexican government and private companies are presented in the book shows how well the author knows the inner workings of his country. All of these elements make for a very compelling read that kept my interest for 432 pages.

But that's not the end of it. The narrative is full of interesting, multilayered characters that have lives full of events that have nothing to do with Milena and the situations surrounding her and the death of the newspaper's owner. That Zepeda Patterson managed to juggle this plethora of characters in a satisfying, meaningful way is a testament to his storytelling skills. That being said, there are portions of the novel in which the author is trying to do too much. The letters from men about their encounters with prostitutes are a nice touch, but ultimately the story would have worked just as well without them. Likewise, by taking readers into most meetings and showing them what goes down before, during, and after them...well, that's how you end up with a book as hefty as this one. Lastly, this is the first Restless Books release that I've read in which the translation is less than stellar. I haven't read the Spanish version of this, so I don't know if this applies to it as well, but the translated version could have used a serious round of edits.

Ultimately, Milena, or The Most Beautiful Femur in the World, deserves to be read because it shines an unforgiving light into the filthy world of human trafficking and shows how those in power are responsible for allowing it to thrive. Zepeda Patterson can write, and that becomes clear with each page full of witty dialogue (there's a conversation about God with a driver that deserves all your attention), fast-paced action, and devastating memories.