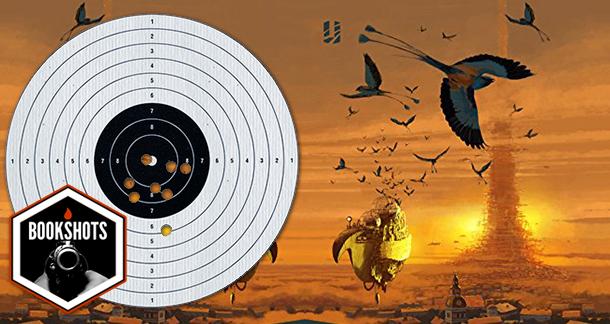 I enjoyed my time with Metronome, but like even the best dreams, it rapidly fades from waking memory.

The Sleepwalkers hunt nightmares and defend the dreamers of the world, but one of their order has gone rogue. Using the songs of aging musician William Manderlay, she plans to find and open an ancient prison that contains powerful nightmare kings, unless the other Sleepwalkers can stop her first.

William Manderlay, a former sailor and withered violinist awaiting death in a retirement home. Once he learns that his songs are being used for evil purposes, he joins a Sleepwalker known as March on a quest deep into the dreaming world to set things right.

While the dreamworld sounds like a beautiful patchwork city of a thousand different architectures and ecosystems, it would be terribly confusing and scary to live in a place that does not obey the laws of physics, or even cause and effect.

The thing about getting old is that it is very difficult to notice. There is no one day when you wake up and think to yourself, ‘I am an elderly man now. I should stop doing all the things I was doing when I was young.’ Instead, the things you take for granted begin to slowly get harder until they become impossible.

Metronome is a perfectly serviceable fantasy adventure. It has a very alluring, imaginative world, and while the characters are flat as cardboard and the plot is another race to stop an ancient evil from being awakened, the story is quite entertaining when it decides to cut loose and have some fun. Sadly, this happens all too infrequently, as most of the novel is bogged down with heavy chunks of exposition, and the majority of the characters live only to recite their chosen fragment of backstory before meeting an untimely end. The novel often feels like a video game, where William wanders from one amazingly rendered locale to another, meeting NPCs who give him sidequests and a few drops of lore before they dutifully walk off the screen. The rules and history of the dreamworld are explained so exhaustively that by the end it hardly seems dreamlike anymore. I enjoyed my time with Metronome, but like even the best dreams, it rapidly fades from waking memory.