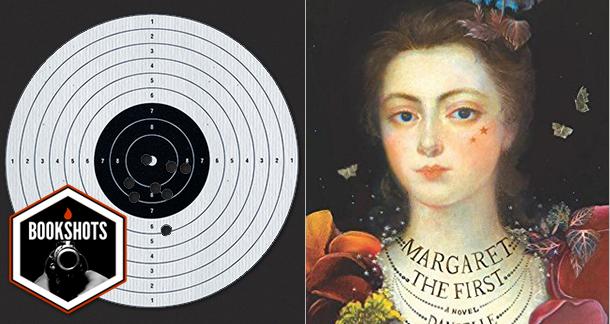 Margaret the First: A Novel

'Margaret the First' is a refreshing and cerebral read that's perfect for a park bench in early spring.

Danielle Dutton, author of SPRAWL and instructor at Washington University in St. Louis.

Margaret the First follows Margaret Cavendish from her youth through the English Civil War, and on to the end of her short but remarkable life.

The Queen of the Night by Alexander Chee, The Bloody Chamber: And Other Stories by Angela Carter

Margaret Cavendish, an erudite young girl who grows into her role as a scientist, writer, scandal-maker, and revolutionary thinker.

Emma Watson would fit the bill, I think.

Absolutely not. I'll take my basic hygiene and human rights over life in the seventeenth century any day.

All summer, heaps of shit steamed on the palace steps. I swear I nearly died of the purging flux that August, saved by a powder of opium, pearls, and gold taken in a bread-pill each night before I slept.

Dutton has picked a fascinating subject in the life of Margaret Cavendish, and the author's own admiration shines through in the prose of Margaret the First. In this slim volume of under two-hundred pages, Dutton traces a poetic outline of the life of the woman known as "Mad Madge."

Seventeenth century England expands before the reader in short bursts; there is no waiting for the story to begin. From page one, you're in Margaret's stream of consciousness, and it's a very interesting stream to be in. Margaret Cavendish lives within a series of contradictions. At first cripplingly shy, she rises to great infamy for her wild fashions and ideas. She becomes the first woman to be invited to the Royal Society of London, and she scandalizes the aristocracy by attending one of her husband's plays dressed as a bare-breasted Amazonian. An early advocate for feminist ideals, she writes prolifically and is consistently anxious about how her words are received. Her thoughts attempt to pry apart the workings of the world. This isn't a novel about gowns and clandestine love affairs—it's a deftly executed account of a woman who struggles to find some understanding of the universe and her place in it.

If you aren't the sort of reader easily wooed by the usual trappings of historical fiction, Margaret the First might be a good place to reconsider, or at least make a detour. Dutton's writing is vivid and honest—she doesn't paint the past in all rosy hues, but describes the smell of yeast and mold on city streets, stacks of soldiers' bodies, “the birdmen with their leather masks” stepping between corpses after a bout of plague. But neither is it purely grim. Instead, the people she describes (particularly Margaret herself) feel real. They swat gnats and grow bored and worry about seeming too vain.

In short, Margaret the First is a refreshing and cerebral read that's perfect for a park bench in early spring.