Bookshots: 'Made to Break' by D. Foy 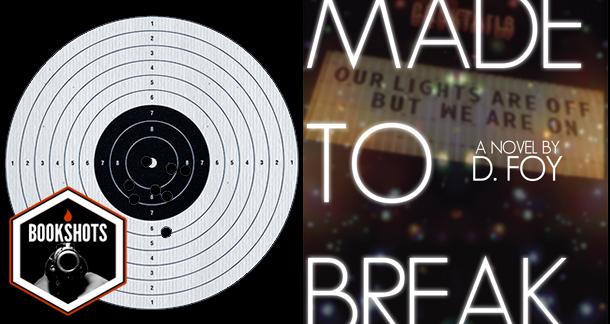 An entertaining, at times artful piece of pulp trash (and I mean pulp trash in the most complimentary way) that will leave the reader spinning.

On New Year’s Eve in 1995, five friends travel to a remote cabin near Lake Tahoe to celebrate and become stranded during a torrential rain storm after a car accident which fatally wounds one of them. As the night rolls on and drugs and alcohol are consumed by the bucket load, egos and friendships shatter as something otherworldly lurks outside in the dark.

Andrew, earnest friend and slightly pissy narrator, whose only real objective on this New Years Eve in 1995 is to screw his girlfriend, Hickory. Too bad he's got all his best pals around, dying figuratively and literally.

If I had a time machine, a young Eric Stoltz. But considering that I control neither time nor space, I’ll say Alex Russell (Chronicle). The rest of the cast would be filled out with complete unknowns, except for the role of the enigmatic Super, a Vietnam vet who picks up Andrew and Dinky after their car accident. This role would have to go to Harry Dean Stanton.

Lake Tahoe? I’d vacation there, but a little too off the grid for my tastes.

I wanted to be naked, to lie naked beneath a tender sun. I wanted the smell of a clean bright day, and heat, tart and dry. I wanted heat that lasted, endless sand, visions of dazzle and grain. Why wouldn’t his eyes release me? … Lanterns, vultures, many things in hell … I made my mind up to take the life of the old man, and thus rid myself of the eye forever … Madmen know nothing …

Ah, the 90s, it was a magical time. The music, the movies, the art (I would include the literature, but, meh), the crazed culture, the star crossed duality of hopeful optimism and biter irony. And, of course, the drugs, the drugs, the drugs. (Can you guess what my favorite part of the 90's was?) Long story short, it was the best of times, it was the worst of times, but who really gives a shit, who’s got the molly? You do? Fuck, come here, man, you’re my best friend! You know that right? What was your name again?

Yeah, folks, the 90s were kind of a vacuous lump in history. Yes, there were tons of great things that came out of the decade, but for the most part it was all surface with very little substance, with an undercurrent of malice and self-loathing lurking that we all somehow mistook for irony.

This malice is, for me, the core of D. Foy’s debut novel. The group of friends trapped in their tiny Northern Californian cabin all share time and space with one another—most have been friends for a decade—but while reading you can’t help but think that none of them would give a second thought to washing their hands and starting life anew with a shiny set of uncontaminated pals. You guessed it, none of these folks are in the least bit likable or ellicit the slightest bit of empathy from the reader. But does this mean they don’t make for engaging characters? Absolutely not. These hot messes of bruised, malicious assholery keep you turning pages just so you can see their fragile egos shatter into a million pieces.

Like the last four Two-Dollar Radio titles I’ve read, Made to Break has the pacing of a breakneck drugstore thriller and doesn’t cling to any single genre. It plays around the edges of gothic horror and locked room mystery. Foy has a poets gift, blending the everyday with surrealist prose, but not so surreal that he loses the readers attention. Overall, Made to Break is an entertaining, at times artful piece of pulp trash (and I mean pulp trash in the most complimentary way) that will leave the reader spinning.