Bookshots: 'Kill the Next One' by Federico Axat 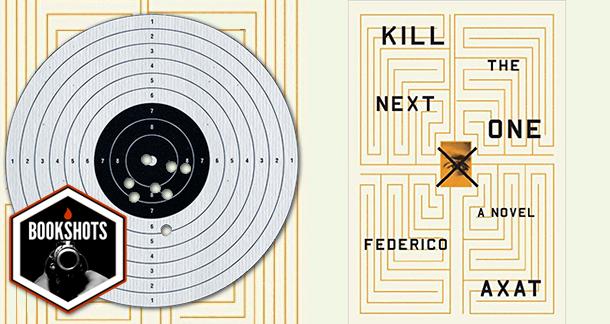 Kill the Next One

Starts fast and never lets up. The first third of the novel packs more twists, turns, and tension than most contemporary thrillers do in their entirety.

Federico Axat, the Argentinean author whose previous novels have been published in Argentina, Spain, and Mexico, and whose work is known for its constant shifting nature, plot twists, and surprise endings.

Ted McKay had a nice house, a beautiful wife, a great job, and two lovely young daughters. Then he was diagnosed with a terminal brain tumor. He decided to take his life, but with the gun in his mouth, someone started knocking on his door. A mysterious man who knows everything about him offers Ted a better way out, a way that lets him do something good before checking out and that will give him an end better than suicide. Unfortunately, not everything is the way it seems, and Ted finds himself in a dangerous, unexpected situation.

Ted McKay. He's a regular guy with a nice job and a perfect family. He's the kind of man who did great in high school and easily transitioned into a comfortable life. He has a few traumas from his childhood and goes to therapy to discuss them, but basically his life is one of comfort and only comes crashing down once he gets diagnosed with a brain tumor and then the business he's offered goes south rather quickly.

The crucial thing about the macrocosm of this narrative is not the geography but the social strata/demographic group in which it takes place. This is a world of mansions, entitlement, high-paying jobs, and lots of peccadilloes and dirty secrets hidden behind fake smiles. No, I would not want to live there or among those people.

He watched in disbelief as the possum sank its needlelike teeth into the dead flesh, its eyes looking mechanically, almost uninterestedly in every direction, ripping the rosy skin from Holly's leg.

Kill the Next One starts fast and never lets up. The first third of the novel packs more twists, turns, and tension than most contemporary thrillers do in their entirety. Axat has a knack both for dialogue and for prose that constantly walks a fine line between reality and surreality. Ted has his situation and problems to cope with, but his memories play a big part in his life and the images his mind creates for him and embeds into reality keep him confused and scared. The visions and dreams, especially those dealing with a possum, are enough to make the narrative a satisfying read for fans of horror novels, as well as lovers of creepy thrillers. Also, this novel has more plot twists than all of M. Night Shyamalan's filmography put together. The setup is effective and makes readers sit up and pay attention, and as soon as it all comes undone, it becomes easy to see that every character has a hidden agenda, everything is probably a lie, and none of what Ted thinks he knows is correct. What follows is confirmation of all those things and a twisted road full of small revelations that only complicate things.

Perhaps the only shortcoming of this novel is that the people Axat decided to populate his narrative with are not the easiest to relate to or feel empathy for. These rich folks have very few things to worry about, and that has been Ted's life until now. Perhaps if he had a different reality, one in which he truly feared for the future of his wife and daughters, he would have been an easier character to like, to be worried for, and to follow as every lie is slowly revealed to him and he's forced to deal with the consequences. Ultimately, however, this shortcoming does not detract from the fact that this is a very tense, smartly crafted novel about illusions and the power of our decisions, especially when those decisions are made under the kind of stress that murder and your own death can bring.