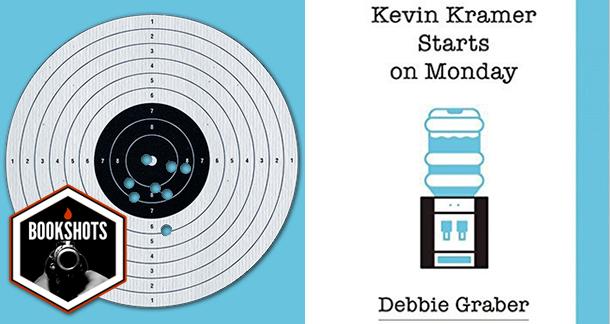 Graber digs into the unreality that surrounds every aspect of our daily lives, but especially that part of it we experience in office settings.

Debbie Graber, who according to the bio on the Unnamed Press website has performed at Second City, worked in an office and has an MFA in Creative Writing from U.C. Riverside at Palm Desert. Kevin Kramer Starts on Monday is her debut collection.

A collection of stories narrated by that person from that time you worked in a call centre, the one in the next cubicle who had long conversations with their therapist during lunch break and always mysteriously smelled of glue.

Nine to Five in the Garden of Good and Evil

Kevin Kramer, who according to the transcripts from his breakfast interviews lives and breathes corporate.

Gabriel (Suits) Macht, rendered as a claymation figure by Aardman Animations and filmed in stop motion.

We all already live there.

I was living with a British family and I got so drunk that I accidentally used their tea cozy as a maxi pad.

Kevin Kramer is a pro. He always maintains eye contact. His handshake is firm. We’ve all met Kevin Kramer at some point in our journey through the world of work and we’ve all shaken his hand and observed his perfect, unshakeable smile and wondered afterwards if we happened to accidentally pierce him with a letter opener or industrial grade stapler, if the wound in his side would leak sawdust.

Graber digs into the unreality that surrounds every aspect of our daily lives, but especially that part of it we experience in office settings, and unearths those dark and scuttling things which lurk just beneath the surface. Entire software departments disappear. Someone rewrites Northanger Abbey for a book club audience, with his own dysfunctional family in the lead parts. Stacy explains to her therapist exactly why no one understands her (she’s the one who mistakes the tea cozy for feminine protection). Sofia Coppola’s ultimate fan guides herself by asking in each situation what her icon would do. Kevin Kramer Starts on Monday is the stream of thought which whispers just below the level of consciousness, the one which makes you mentally dress your coworkers in Star Wars regalia or hold occasional conversations with the bee you’re trying to chase out of a window. These stories are weird and surprising and intensely familiar all at the same time, because we’ve all lived them, only not usually when we’re completely awake and concentrating on the page.

Kevin Kramer is a tough negotiator. Kevin Kramer has an Aeron chair which cost 800 bucks. 95% of employees surveyed think you should go out and buy Kevin Kramer Starts on Monday right away.