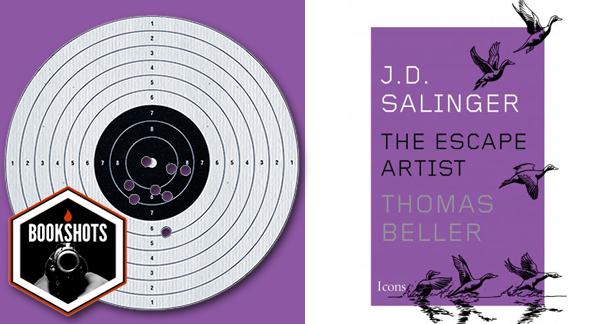 Beller...focuses on the minutiae of Salinger’s existence, the small details that Shields' biography skimmed over...

Thomas Beller’s personal journey during the writing of a biography of J.D. Salinger

Salinger by Mark Shields, the books of J.D. Salinger.

Literary intellectual powerhouse, Thomas Beller, and Jerome David Salinger. And, come on, if you don’t know who he is, you’ve been living under a rock for the past 60 years.

Beller would be portrayed by John Hawkes and Salinger by Robert Downey Jr. on stilts.

Considering that the bulk of the book takes place in New York, you bet your sweet bippy I would.

There’s a first time for everything, but I really didn’t have a favorite quote. So, sorry, gang.

I know, I know, in certain circles that's kind of like admitting I enjoy stomping puppies to death, but for one reason or another, I’ve never been able to connect with the likes of Holden Caulfield or the precocious Glass family. I guess when it comes to privileged WASP post-war literature, I’m a Cheever man.

But if you asked me if I’d read David Shields and Shane Salerno's massive oral biography, Salinger, or watched Shane Salerno’s companion documentary, my answer would be a resounding YES.

And if you asked if I planned on buying and reading Salinger’s posthumous novels and short story collections, the answer would also be yes.

Why, you ask, would I read the biography, watch the documentary, and plan on buying Salinger’s long hidden books if I’m not a fan of the author? Probably for the same reason you’re going to: J.D. Salinger is the single most polarizing figure in the entire history of American letters. Twain, Hemingway, Faulkner, Vonnegut, Lee, Roth, King (Okay, maybe King ranks with Salinger?), none of them have had the cultural impact of Salinger and his four slim books. Plus, Salinger committed the greatest American sin by not wallowing in his fame and instead chose to disappear completely. For most citizens of the U.S., this withdrawal from public life cemented Salinger as either a hermit/saint or a complete freak. But more than anything, Salinger was a genius, and deserving of our collective attention.

With Salinger’s death in 2010, I expected a virtual avalanche of biographies and scholarly works to come tumbling out of the New York publishing machine, but the only volumes to emerge have been Shields’ massive (and engrossing) work and Thomas Beller’s slim volume, J.D. Salinger: The Escape Artist. And to be blunt, I honestly think that these two books are really all that are necessary to tell the story of Jerome David Salinger. In fact, it might be one volume too many.

What sets the two books apart is not only physical size, but overall content, and comparing the two is radically unfair. Shields’ biography is a broad, everything plus the kitchen sink style expose. It revealed Salinger in all his glory and innumerable personal faults, and all of it came straight from the lips of those who knew him best through the various stages of his life. With The Escape Artist, Beller instead focuses on the minutiae of Salinger’s existence, the small details that Shields' biography skimmed over: The summer camp he attended, the boarding schools which shaped his characters, his friendships and teachers, his lovers and children.

The other aspect which sets the two books apart is while Salinger is at times too detached and cold, and so swarming with detail the reader at times is overwhelmed by the scope of the writer’s life and work, The Escape Artist is a far quieter book, and is as much the story of Beller’s journey of researching and writing the book as it is Salinger’s story. The question is, is the story of Beller’s journey enough to sustain the narrative? The answer, unfortunately, is no. Yes, Beller is an exceptional writer (I particularly enjoyed his essay collection, How to Be a Man: Scenes from a Protracted Boyhood), but his deep-rooted infatuation with Salinger and his protracted trip down the scholarly rabbit hole just doesn’t provide enough meat to sustain its slim 192 pages.

Joshua Chaplinsky from New York is reading a lot more during the quarantine June 5, 2014 - 6:45am

The man is definitely more interesting than his work.

See, I feel right the opposite.  I have zero interest in the biographies and documentaries.  But his books are some of my favorites.  I can't wait to get the full collection of the Glass family storeis when it comes out.  But as far as how the guy lived, it doens't interest me much.  Which is probably why i don't watch TMZ or reality TV shows.

avery of the dead - I've never seen TMZ or most reality shows (I will cop to watching season 2 of American Idol. Ruben Studdard was the bomb, yo!). I read the bio/watched the documentary because I'm a bit of an amateur literary historian, and the stories behind Salinger's characters absolutely fascinate me.

I like the idea of a hybrid biography - one which blends the bios of both subject and researcher, because with someone like Salinger, any attempt to be a dispassionate recorder of facts is doomed to fail. He's iconic - and in that respect a mirror for the person writing about him.

Keith - yeah I didn't mean to imply you were into TMZ or anyting, just putting that out there as a possible reason i don't find myself interested in the biographies.
Although there are authors that break this rule for me.