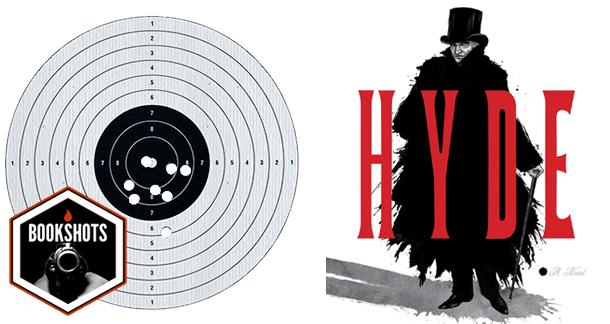 Levine stays true to his source, making Hyde more of a why-done-it than a who-done-it...[but] there is more than enough to compensate in this richly detailed and engrossing portrait of psychological disintegration.

A reimagining of Stevenson’s classic, Dr. Jekyll and Mr. Hyde, but with a twist. This time Hyde is the hero.

Anything steeped in sinister Victorian ambience.

The transformation in this version of Jekyll and Hyde is more Keyser Soze than Lon Chaney Jr, so I’d go for Kevin Spacey doing the full Frank Underwood for Jekyll and reprising his part as the put-upon Quoyle in The Shipping News for Hyde.

Victorian London, full of dollies, mountebanks and grogshops. I can almost smell the laudanum from here…

Glancing over the barman's shoulder, we caught our unexpected reflection in the warped mirror: a bulging mass of flesh with eyes goggling beneath a distended forehead and an octopus mouth.

Ronald Havisham Frame comments in his blurb for Hyde that his only reservation about Levine’s book is that he wishes he’d thought of the idea first. Flipping Stevenson’s original notion of Jekyll as morally upright but over-curious researcher and Hyde as the demon-version of himself that he inadvertently unleashes on an unsuspecting world is, as Frame acknowledges, an intriguing concept. Times, after all, have changed. Back in 1885, when our grasp of criminality was confined to labeling the bumps on plaster heads and rehabilitating wrongdoers by putting them on a treadmill for eighteen hours a day, Jekyll and Hyde neatly personified that simplistic view of moral choices: black vs white, wrong vs right, good person vs bad person. Now, in the 21st century, with Freud, two world wars and many experiments on monkeys behind us, we take a more nuanced view of what makes the average person tick. Good people do bad things. Bad people do good things. Even the most heinous criminal has a story behind their evil acts. Sometimes the abuser was also abused.

But this isn’t an updating so much as a retelling. Levine sustains the Victorian atmosphere of the original, lavishing care on the details: creaking whalebone corsets, giant iron clocks with hands like the nibs on fountain pens, the glimmer of gaslight. The imagery has a hint of the industrial remorselessness David Lynch employs in The Elephant Man, and Hyde represents much the same character as John Merrick – the moral centre of the story, despite his unprepossessing appearance. This time around, Hyde is the one who mourns the dead swallows which collect outside his decaying manse. Hyde is the one who falls in love. Hyde is the one who wants to get to the bottom of his beloved’s disappearance.

As for Jekyll, he has his reasons for what he does. He’s searching for freedom – psychological rather than physical. Hyde represents his desperate attempt to flee the past and live a normal life, now burdened with the kind of backstory that would have a young Sigmund Freud reaching for his notebook and pen. Stevenson is primly vague about the animalistic instincts that Jekyll seeks to purge by creating Hyde. Levine isn’t. Locating the source of Jekyll’s mental torture in the region below his belt buckle doesn’t just modernize the tale, it makes it so much more credible. Some might see this as taking liberties, but you could equally call it taking libido seriously.

In other respects, Levine stays true to his source, making Hyde more of a why-done-it than a who-done-it, and if this dilutes the suspense for those of us familiar with the story, there is more than enough to compensate in this richly detailed and engrossing portrait of psychological disintegration.