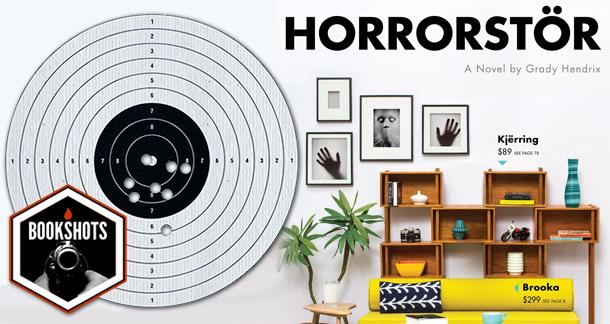 Grady Hendrix, multi-published author of books and stories like Dead Leprechauns & Devil Cats: Strange Tales of the White Street Society (which, incidentally, just leaped onto my To Read list based on the title alone).

It quite literally has everything a horror movie has to offer: ghosts, possessions, doorways to another dimension, and even a seance!

Something is rotten in the state of Orsk, an Ikea-wannabe store with a murderous core. It's up to Amy, disgruntled employee and unwilling hero, to save her fellow employees from the psychotic ghost of a dead prison warden.

Good Furniture Gone Wrong: A story of murder and mayhem in a faux-Scandanavian superstore.

This is a book that reads like a classic ghost flick, so rather than giving you other book titles, I'll say instead: Poltergeist; Thir13een Ghosts; The House on Haunted Hill; 1408.

Amy is a young 20-something whose life is going nowhere fast. She's got a bummer of a retail job at Orsk, and she's doing her best to avoid work and, more importantly, her boss Basil, whose interest in her success is nothing short of creepy.

The story is set in the Cleveland, Ohio-based (fictional) Orsk superstore, a sprawling, Ikea-style world of artificial rooms and cavernous warehouses. While I love Ikea with all my heart (back in high school, my best friend and I would spend entire days in the Ikea in Elizabeth, New Jersey, just because it was new and exciting and sold cheap accessories for our rooms), I'd rather not live inside one. I think the daily grind of thousands of people wandering my halls would get old fast...not to mention the ghouls and goblins taking up residence in Orsk, due to the fact that it was built on the site of a burned-down asylum/prison...

Betcha I can NEVER pick just one sentence, in any of my Bookshots reviews. Here's part of a paragraph instead.

'The prison was round, with a guardhouse in the center, so that the prisoners—he called them penitents—never knew if they were being watched. Zero privacy. It was called a panopticon. Underneath the cells were three sub-basements where the penitents worked. Giant labyrinths full of mindless tasks designed to rewire their brains.' He shrugged. 'Just like Orsk.'

To say I loved the experience of reading Horrorstör would be putting it mildly. I read it fast, mostly on the three airplane rides it took my family and me to get to Mexico, and I read it on my Kindle. This will be important in a moment, when we talk about the actual printed book. But first...the story.

The story is fun and campy. It reads exactly like a horror movie, all visual cues and snappy dialog. Main character Amy has all the snark and sarcasm inherent in a great lead horror movie role, and it's clear of the supporting cast who will be the first to die. The action is great— there are chase scenes and horrific torture devices and the foulest smells and sights imaginable. It quite literally has everything a horror movie has to offer: ghosts, possessions, doorways to another dimension, and even a seance! And if the whole "new building built atop the site of an ancient, evil prison" plot sounds rather formulaic, that's probably because it is. For me, though, a lifelong horror fan, that didn't take away from the story at all. Instead, it felt like something in which I was complicit—a nod to the movies I'm guessing author Hendrix loves as much as I do.

Such was my experience with the Kindle version of Horrorstör: fun, snappy, silly, creepy.

And then the book arrived in my house, like a little gift waiting to welcome me home from Mexico...and it was divine. Quirk Books, the publisher of Horrorstör, is well-known for their interesting publications (see: The Resurrectionist, one of my favorites from last year). With Horrorstör, they've outdone themselves.

Created to resembele a furniture store catalog, the cover alone is a work-of-art, a magazine-worthy snapshot of a bright and shiny room (with the smallest hint of something sinister) on the front, and a grim, dismal scene on the back. Inside, full pages are devoted to furniture descriptions and illustrations that gradually morph into medieval torture devices. The design is well-planned, and brilliantly executed.

Horrorstör. It's beautiful, eerie, and—somehow—elegant. You need to see it to believe it.

Amazing! I've communicated my adoration for novelizations on this site some time recently, so it's pleasant to see that affection broadened. For me, ghastliness novelizations specifically were an approach to "see" such motion pictures, http://www.latvphoneinternet.com/ which I couldn't see in a customary sense generally (excessively frightening for a child, making it impossible to watch, however understanding it was alright). Alan Dean Foster's novelization of Alien was a specific top pick.