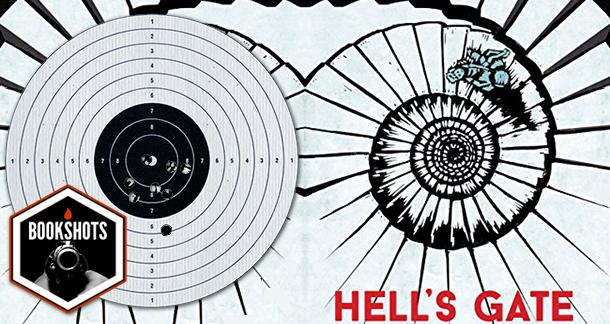 Matteo and Giuliana are a happy working class couple living in Milan, Italy with their only son, Pippo. One day as Matteo and Pippo are hurrying to school, they’re caught in a gangland shootout and Pippo is shot and killed. Needless to say, Matteo and Giuliana lose their collective shit, and Giuliana makes Matteo vow to bring her son back to her and seek revenge on the men who killed him. He does both. Unholy alliances, torture, murder, and hilarity ensue.

Pippo: Kind of dead son of Matteo and Giuliana

It’s hardboiled crime fiction, so it’s light on the character descriptions, so they could be anybody. For the sake of this review, I’ll just say Bryan Cranston would be perfect for all three roles.

He let the sounds of the city wash over him as his thoughts wandered: why could men not just die away like flames? Just gently exhaust themselves until they were extinguished.

Here’s a big surprise for you: The French are just plain better at writing noir.

But you know what else they’re better at? Writing hardboiled crime fiction. Detectives, cops, criminals, junkies, bloodlust, hate filled revenge, all those ultra-American tropes we know and love so well, the French have mastered them. I don’t necessarily know why they do it better, but I think it has to do with the fact that the French consider crime fiction escapism. In the states, crime fiction has become the 21st century’s answer to social realism. American crime fiction tackles issues like race, poverty, addiction/the drug war. Crime fiction handles the issues most genres mince around or bloat with so much subtext that it’s lost on the average reader. It’s also the reason why I think crime fiction has been slowly losing its readership in the states. Why read about fictional crooks, dirty cops, shifty politicians, and wholesale mass murder when you can read about the latest atrocity committed by the cartels or the widespread drug use and gut churning poverty in the southern states in the Huffington Post?

American crime fiction cuts too close to the bone for the average B&N shopper.

To cut to the quick, Hell’s Gate is pure escapism. Yes, it’s ultra-violent, it has shootouts, gangsters, and bloody revenge, but you also know that despite its at times stark realism, the scenario that the novel is built around can only be the stuff of fiction. Sure, it’s grim and gritty, the characters are largely unsympathetic losers, but it’s not trying to enlighten or educate you about a culture you’re a part of but rarely experience. All it wants to do is entertain you, and that’s exactly what it does.

Very surprised to read Laurent Gaudé's name in Litreactor's columns. Very mainstream in his topics and his style. And his tv appearances. I will give this book a try.