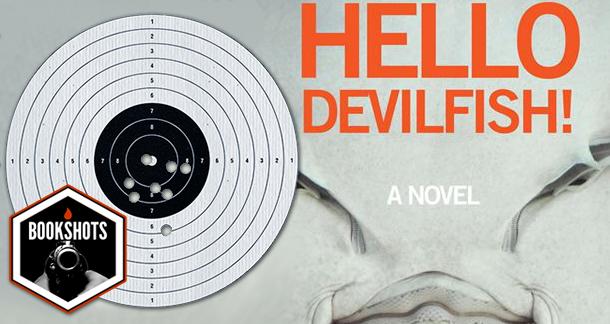 I could try to do this plot justice in my own words, but why would I? Dakron's website describes it best: "A first-person (or first-fish) account of a giant blue Japanese movie monster stingray's attack on contemporary Tokyo and his tragic morph into human form."

A Portrait of the Stingray as a Young Man

...and introducing, an ocean squid. Or, CGI. In its human form, probably Michael Cera.

I mean, I'd love to live in Tokyo. But with monsters on the loose—well, never mind, I think I'd still be down. I've never fled from anything before. I'd love to flee from something.

Then you morons rebuild Tokyo—and it all happens again! It's more boring than God's diary. Dear diary—nothing new. Omniscience sucks.

The best way to read Hello Devilfish! is also the best way to watch a Japanese monster movie: all in one shot. Queue it up, pop some popcorn, sit back, relax, enjoy. I don't know if Dakron intended it that way, but, at 148 pages, you'd be doing yourself a disservice if you read it any other way. Putting it down and coming back to it would be like pausing Godzilla in the middle and finishing it the next the afternoon. It just wouldn't be the same experience.

Let's not get this twisted, though. Hello Devilfish! isn't some serious-faced monster story. It's a comic romp that makes you laugh nearly as much as you shake your head and say, "What the fuck am I reading?" It's a great feeling, a change-of-pace in a literary world with not nearly enough changes of pace. It's like Monty Python acting out a Christopher Moore novel, or Christopher Moore writing a Monty Python sketch, or maybe it's not like either of those things, and it probably isn't because it's one of the more unique stories I've read in recent memory and unlike anything you'll read this year.

And that's assuming Hello Devilfish! is only about what the blurb on the book jacket says it's about. Yes, a giant stingray is eating Tokyo like its out to lunch at some trendy Ramen shop, and yes, he must evade the unwanted romantic advances of Squidra, a 100-foot long (tall?) squid, and yes, a freak accident turns that stingray into a weak, pathetic human being (which is where the story really begins to shine), but it's more than that (it always is, right?).

Hello Devilfish! is also a scathing commentary on "Big Lit" and contemporary society, veiled in Manglish and monster movie tropes and hilarious turns-of-phrase ("It's curious I even understand him—me talk Manglish, him talk Japanese. Hello Plot Flaw!"). It's quite a bit of fun if you're the absurd, open-minded type. And if you're not that type, you're the butt of the joke and the type who actually needs to read this book to understand why you're responsible for the world's current unstable state and its wholly uncertain future.