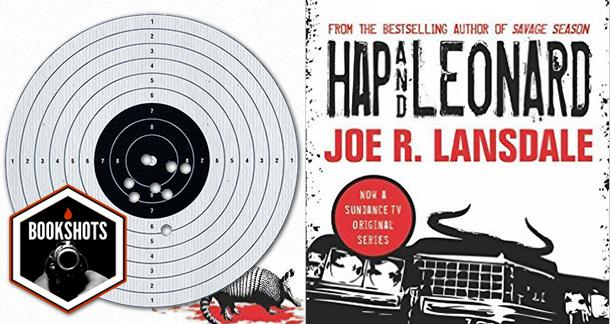 Joe R. Lansdale, author of the series of the same name.

Lansdale is one of the all-time heavyweight Texas storytellers, and Hap and Leonard are his most prized creations.

Hap Collins and Leonard Pine, an odd couple of tough guys, help out folks in trouble and find more than their fair share during their misadventures in Texas. This collection of short stories sees the titular duo tangle with racist rednecks, bank robbers, and the Dixie Mafia. There’s also a classic locked-room murder mystery and a recipe for a pretty mean pot of chili.

The dynamic of Hap and Leonard actually reminds me a lot of the friendship between Superman and Batman.

Hap Collins, a recovering idealist and reluctant tough guy. His best friend/brother in arms is Leonard Pine, a gay black Vietnam vet who takes no shit from anyone, not even Hap.

The new Hap and Leonard series on Sundance TV has already cast them. Michael K. Williams, best known as the iconic Omar on The Wire, is the best possible choice to play Leonard Pine. Sadly, James Purefoy’s Hap Collins comes across as Leonard’s bumbling sidekick rather than his equal. If only they could’ve gotten Josh Brolin.

Small towns in East Texas are a nice place to spend a summer, but I wouldn’t want to stay year-round.

Leonard looked over at me, but didn’t say anything. Sometimes he knew when to keep his mouth shut, but you could put those times on the head of a pin and have enough left over to engrave the King James Bible and a couple of fart jokes.

Joe R. Lansdale is one of the all-time heavyweight Texas storytellers, and Hap and Leonard are obviously his most prized creations. You can tell he is having too much fun putting them in strange situations and seeing what happens, a joy the reader shares as they watch the title characters stumble and struggle through nasty situations that are somehow always worse than what they seem. Hap Collins’ narration is the pinnacle of the Lansdale voice, equal parts vulgar and academic. Many of the characters they meet are jokes personified and the situations they find themselves in are frequently absurd, but the story always pivots before it becomes too unbelievable. Hap and Leonard are capable combatants, but they are not action heroes. While they are clever, they are not master detectives that need only a shred of evidence to solve a mystery. If you are a fan of the genre and looking for a new character to get into, Hap and Leonard won’t steer you wrong.