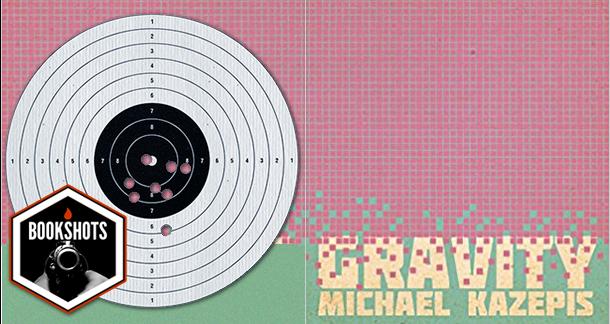 I loved that [Gravity] was all killer with no filler, but I would have loved it even more if there were three or four more stories of the same quality.

Michael Kazepis is the author of Long Lost Dog of It and now Gravity. His work on Veterans: Faces of World War II has been featured in The New Yorker and Vocativ. In 2014, he launched King Shot Press, a micropress of radical books. He lives in Portland, Oregon and placed third in Mandy De Sandra's 'Hottest Small Press Studs List.'

A short short story collection involving Henry Rollins, the seedy side of Athens, Salvador Dali, astronauts and aliens. This had some of the best flash fiction I've read this year.

Kazepis and the Cold Hearted Kooks

Read this if you Like(d):

Amy Hempel or Dennis Johnson, and you wished they lived in Greece.

Henry Rollins should play himself, Alex Hakias should be played by John Stamos (but directed by Tarantino), and Adrian Brody should play Salvador Dali again.

From Athens, to space, to the Balkans. I’m going to pass and stay in boring ol' New Hampshire.

When it got dark and they started to leave, the narrator didn’t know whether to hug her or try to kiss her goodbye, and after a prolonged silence, they took different stairwells, into the metro, watching each other from opposing platforms, neither waving, until one then both of them were gone.

Every story in this collection, from the flashes to the longer pieces, is gripping and memorable. Like Kazepis' debut work, The Long Lost Dog of It, he shows that he is an emerging voice that can write engaging world working-class literature. With Gravity, he makes the equivalent of a great EP that is catchy, short, and impressive. My only complaint is an EP is never as satisfying as an album. It’s a very short collection. I read it in about an hour and a half. I loved that it was all killer with no filler, but I would have loved it even more if there were three or four more stories of the same quality. Hopefully Kazepis doesn’t wait another three years to drop a new book, but I will read it whenever it does.