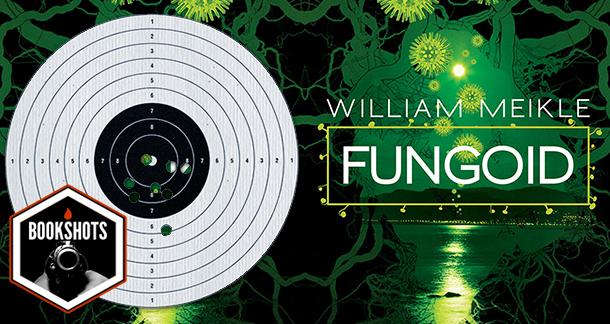 William Meikle, a rather prolifically published Scottish horror/thriller writer who looks like someone with whom you'd want to be friends (at least based on his Amazon author photo).

Trippy and fun. Bizarre. Wild. Give it a shot...if you dare!

Plot In A Box:

Well, y'all. The end of the world is nigh, but it's not monsters or AI or zombies or plague or nuclear war. Nope. In this version of the apocalypse, some kind of mutant, freakishly smart fungus is devouring humanity, one hypnotic minute at a time.

Invent A New Title For This Book:

There's a Fungus Among Us

Then this book is for you.

There's Shaun and Rebecca, a married couple on opposite sides of a continent when all hell breaks loose.

There's Rohit and Irene, two comparative strangers who fall in love while trying to save the world.

And then there's Jim Noble. Poor Jim Noble. The less said about Jim Noble, the better.

Said Lead(s) Would Be Portrayed In A Movie By:

Shaun: Ryan Reynolds, mainly because I started watching the remake of The Amityville Horror the other night and Ryan Reynolds is in it. Thus, he comes to mind.

Rebecca: This is a tough one. She's sort of a generic mom character, not very fleshed out, so I guess a generic mom actress would work? Let's go with Jennifer Garner, then.

Rohit: Aziz Ansari, who's quirky and smart and cool.

The book spans Canada, coast-to-coast, and I loved reading about how lovely it is...at least until the fungus does its dirty work. It sounds amazing, really, and brought me back to my days as a little girl, reading Anne of Green Gables. That said, Canada is cold in the winter. Cold and I don't get along very well, so I'll stay in the south...for now.

What Was Your Favorite Sentence/Passage?

Then again, it was a government man talking, and Shaun trusted them as much as he did a wet fart.

This was a funny, oddball little book. It's a fast read — like, two or three nights' worth of reading, fast — and it keeps you turning pages. The apocalypse itself is inventive and, well, disgusting. Yuck. Everything is being eaten by brown fungus, turning to goo, melting into nothing but...fertilizer.

So I enjoyed it, on several levels. I definitely gave some mushrooms in my fridge a side-eye, and when I spotted a tomato with mold growing on it, I tossed that thing in the trash so fast it probably had whiplash. Damn fungus.

That said, as a reader, I wanted a bit more than I got from the characters. It was definitely a plot-heavy tale. The people involved felt flat to me. Generic. Sure, Shaun liked his cigarettes and Rebecca wanted a drink, and you got a flash or two of Rohit's backstory...but that's it. I never got to know the characters, and it's always the people in stories that I love the most. There were even two kids involved, and kids in a thriller can lead to some of the greatest bits of story ever (this is a movie reference, but think of Newt in Aliens here), but the kids...I couldn't tell them apart, and that felt like a wasted opportunity.

Still, though. Fungoid was trippy and fun. Bizarre. Wild. Give it a shot...if you dare!

I really enjoyed this book too, thanks for the review!