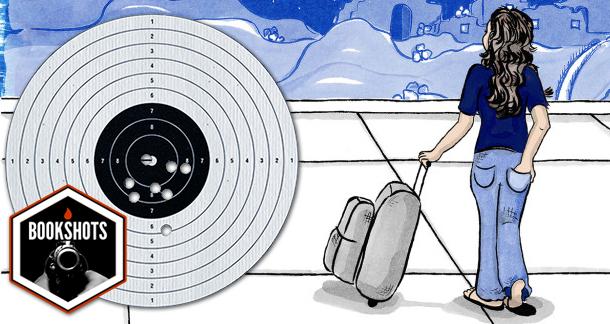 A wry and deeply moving exploration of what the Holocaust means to the descendants of survivors.

Amy Kurzweil is a cartoonist and writer who lives in Brooklyn. Her visuals can be found in The New Yorker and her short stories have appeared in The Toast, The Washington Square Review, Hobart, and Shenandoah, among other places.

The story of three generations of women—Amy, her mother and grandmother—weaved together with her Bubbe’s testimony as a holocaust survivor.

Monsters in the Window

Amy, an anxious Jewish artist who is trying to navigate her identity.

Emmy Rossum from Shameless would play Amy and Ruth Gordon would be resurrected to play her Bubbe.

There are the personal narratives we experience, and then, there are the ones we inherit. Amy Kurzweil ties these two together in her family tragicomic Flying Couch as if to say: these two narratives aren’t separate—together they help us understand who we are.

This rings true especially for the granddaughter of a Holocaust survivor. When readers first meet Kurtzweil’s Bubbe, she is a zany woman who loves to sing, collect cans, and protect her rug with beach towels. She has no filter and her grasp of English is spotty, so most of what she says evolves into jokes between Amy and her mother.

Kurzweil beautifully balances humor with the history of her family’s tragedy. At times, her grandma cuts lines or hassles servers shouting things like: “VAITRESS! Bring me some vater please—you know I survived from HITLER!” As Kurtzweil poignantly puts it: “Humor is mortar. It binds the bridge between the real and the unimaginable, between what we’ve lost, and what we can’t get rid of.” Her grandma’s unforgettable losses haunt Kurtzweil’s family without warning—even a stroll through the neighborhood prompts Bubbe to tell Amy that her eyes are the same as her starving baby sister’s right before she died.

Flying Couch is a wry and deeply moving exploration of what the Holocaust means to the descendants of survivors. Kurzweil artfully weaves her grandmother’s survivor testimony within her own coming of age story. Her obsession in understanding and immortalizing her Bubbe’s tragedy can be felt on every page. As her Bubbe puts it: ”Never again. Now we want to talk because we don’t want for it to happen again, not to anyone.”

Wow! This is the nice review of the book! Now I want to buy it and read to write my own opinion for http://caessaywriter.com/the-review-of-edusson-com/ Thank you so much for the recommendations.