Bookshots: 'Fear is The Rider' By Kenneth Cook 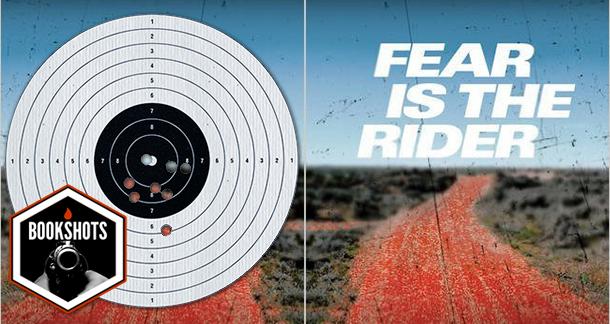 Fear is The Rider

Yet another “unearthed” work from a major writer that should have remained buried.

Creepy yuppie, Shaw, is driving to a job interview in Southern Australia and meets an attractive young journalist named Kate in pub while they’re both stopped taking a break from the road. They chit-chat, for 20 or 30 minutes, Kate mentions that she’s going to one of the most desolate regions of the outback to gather information for an article she’s writing and then leaves. Shaw then gets into his head to follow her. As he’s passing through the region, Kate darts out of the bush, chased by a horny, bloodthirsty evolutionary holdout, who then steals Kate’s vehicle (nope, I’ve no idea how this thing knows how to drive a car) and chases after them. Lots of descriptions of the shitty roadway and traveling down it at 90 miles an hour and hilarity ensues.

The Weight Of The Sun

Duel By Richard Matheson and Off Season By Jack Ketchum

Shaw: Lonely, kind of creepy yuppie who can drive off road in a Honda Civic like a demon.

The Australian outback? Hell, no, that shit wants to kill you.

It was a smell she never encountered before. Not man, not animal, something carrion, but alive. It seemed to envelop and suffocate her, then became tangible as two arms wrapped around her body and began tearing at her clothing.

Writing a chase story is hard. If you do it right, you have Richard Matheson’s classic novella, Duel. If you do it wrong, well, you get the shitty remake of The Hitcher. It’s a tough balance between action and motivation, and where most writer’s fail is the latter. They just can’t make the story believable enough and lean far too heavily on the cars whipping down the highway or isolated dirt road. The unfortunate part of Fear is The Rider by the late, legendary screenwriter and novelist, Kenneth Cook, is that this previously unpublished short novel is all repetitive action without any real meat to it.

The characters are two dimensional and the situation they find themselves in is wholly unbelievable, largely because I just found it too hard to believe that the primordial, evolutionary throwback is able to operate a motor vehicle and do so with such deadly force. To be blunt, Fear is The Rider seems almost like an exercise Cook worked on between his film work and novels; perhaps it started as a film treatment but instead became something he would occasionally work on. Overall, it’s yet another “unearthed” work from a major writer that should have remained buried.

This is funny. Thanks. I enjoyed it. I might read this just because of your take on it, even though, you aren't exactly advising me to do so. Very nice column.