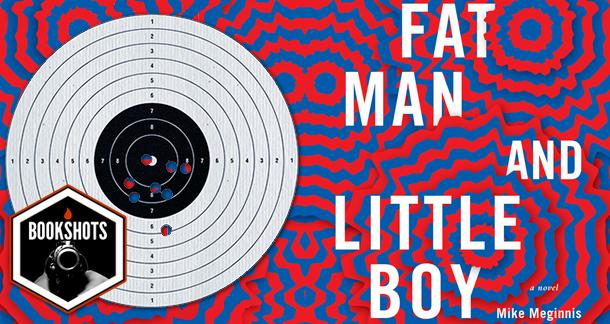 A reading experience similar to being pummeled by a Mickey Mouse with giant plush hands – delightfully, perversely enjoyable.

How I Learned to Stop Worrying and Love the Bombs

May We Shed These Human Bodies by Amber Sparks, Swamplandia! By Karen Russell, anything by David Sedaris

Stan Laurel and Oliver Hardy. No prizes for guessing who would be whom.

Possibly not the atomic wasteland of the book’s opening, but the action moves to Paris in which case YES.

When he was born Little Boy remembered it all. He knew what the scientists said to him as they stroked his shell, thinking no one could hear them. He remembered what it was to live as potential.

I have become Death, the destroyer of worlds, Robert Oppenheimer claimed to have thought upon seeing the destruction wrought by the first test bomb in Nevada. And if he did think that (because Oppenheimer was not only a brilliant man, but also an assiduous cultivator of his own legend) he was right. Despite some recent competition from mass epidemics and rogue comet strikes, nuclear conflict still lies close to the top of our list of Things That Might Send Us the Way of the Dinosaurs. The dropping of the bombs on Nagasaki and Hiroshima provided a brutal full stop to the war in the Pacific; an act we have remained conflicted about ever since. Thinking changes, with time. The idea that the bombs saved lives (by demonstrating to the maniacally committed Japanese that surrender was preferable to annihilation) has given way over the decades to a more realistic view. We can’t take back what we did, but we can look upon the destruction we wrought and feel regret.

And what better way to explore that regret than by putting a human face to the two engines of death? Fat Man and Little Boy emerge from the devastated cities and bear witness to the effects of their detonations. Their journey involves litters of piglets, burning trees, an Oriental spirit medium bristling with peacock feather decked needles like some acupuncturist’s nightmare, conjoined infants, unexplained pregnancies, identical twin movie actors, mysteriously growing mold (mushroom clouds anyone?), inadvisable bike stunts (don’t try this at home kids), Kamikaze pilots and a hotel set up in the grounds of a former concentration camp.

Through all this, Fat Man and Little Boy stumble. They aren’t much good at being human, although Fat Man does eventually settle down and attempt to raise a family. With guileless prose, Meginnis uses his two heroes to gently skewer America, the holocaust industry and war movies, which makes for a reading experience similar to being pummeled by a Mickey Mouse with giant plush hands – delightfully, perversely enjoyable. I loved every minute of it.

What will Meginnis produce next? I can honestly say I have no inkling. But I can say I’m looking forward to it.

I like what I'm reading about this book. Definitely gonna put it on my reading list.  By he way, the first nuclear device was detonated in New Mexico, not Nevada.