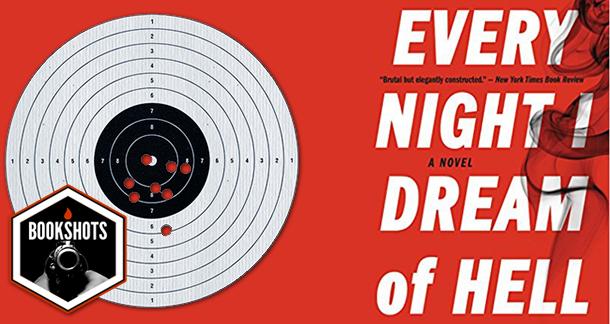 Every Night I Dream of Hell

If you want pages full of unnecessary descriptions, go read some Russian classics.

Guy who starts out as low-ranking goon for the mob works his way up at a time when everything is going south, a lot of people are getting murdered, and everyone around him seems to have a secret agenda.

Books that start with a list of characters, repetition, and tough guys doing tough crime things, talking about crime, and meeting to discuss crime.

Nate Colgan, a guy who's good at kicking ass and likes to explain organized crime.

Glasgow. I mean, not a big fan of the weather, but I'd love to visit.

Okay, listen, we have to talk about this one. Mackay has won a ton of awards and is supposed to be a master storyteller. This novel made me wonder if he really wrote this. I started reading and lost interest almost immediately. For starters, this is one of those crime books that feature a tough guy talking about muscle and jobs and meetings and tough guy stuff and the organization and blah blah blah. You get the point. The main character not only has a boner for perpetrating and discussing crime continuously, he wants to bring you along for the ride. Any crime book that has a line like this one has already lost the battle for my attention: "What I'll try to do now is explain a little something about the food chain in our business." Don't get me wrong, there is a decent crime story here, but it's buried in unnecessary garbage. For example, before the meetings between the mobsters go down, Mackay spends between four and seven pages letting us know how the outside of the building looks, how the buildings around the building look, how the room looks, where the chairs are places, what kind of stuff is on the table, and who's standing next to whom. If you want pages full of unnecessary descriptions, go read some Russian classics.

Ultimately, my biggest problem with this novel was its merciless repetitiveness. I go it in my head that it was repetitive, so eventually I was only more or less seeing the same words over and over again. I wanted to make sure I was right, so I went back to reread some chapters, this time paying attention to every word. What I found was this: I was right all along. In chapter 5, for example, the word "muscle" is used four times in the first few paragraphs, and then it goes on with more of the same. Likewise, the word "business" is used eleven times in chapter 6. Think that's bad? It's then used eight more times in chapter 7. Don't think that's ridiculous? Then put on your critic hat and dig into this morsel of dialogue:

There are people making moves against the drug side of the business, but there always are. Nature of the business. I haven't heard anything about Kevin's business being vulnerable.

Fine, if you don't want to blame Mackay, then blame whoever forgot to edit the damn manuscript. In any case, if the novel lost me in the first dozen chapters, and what came later was just fast reading in order to get it over with. Sure, there are some good scenes, spots in which the pace is great, and a few explosions of violence that are entertaining to read, but everything that's piled on the bad side of the scale pushes this one into the "stay the hell away from it" category. I have no idea how this ended up being published by Mulholland, who always delivers the goods, but I hope it's the last time they do this to us.

Nadja from Born in NYC, raised in Munich. Currently in Kentucky. is reading Nothing Gold Can Stay April 13, 2017 - 6:04pm

Sounds like the guy really likes to show off what he knows about organized crime! Thanks for a thorough review.

We have a name in Icelandic for the times a word is repeated in a way that makes it clunk to the reader, especially within the same paragraph. It is called "death-stance", an apt description of the writing in this book it seems.