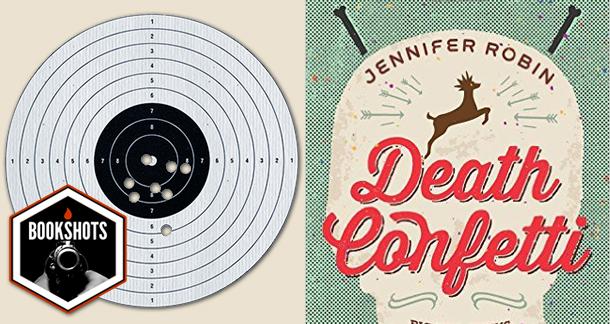 The best explanation I can give is to suggest you watch the book trailer and say the work itself consists of autobiographical sketches of Robin’s life in Portland, Oregon.

The Argonauts by Maggie Nelson, The Orange Eats Creeps by Grace Krilanovich,  Madeleine is Sleeping by Sarah Shun-lien Bynum, Blood and Guts in High School by Kathy Acker.

Analyzing a book like this is like trying to explain the beauty of a flower by pulling the petals off it.

Portand, Oregon and its collected weirdos.

James Franco, in mime, with narration by Patti Smith.

I become uncontrollably angry at the sight of wheatgrass, kale or tofu. It would probably be best for everyone if I avoided the place.

Whether you love Death Confetti or hate it depends almost entirely on what kind of day you had. If you had one of those days where the person in the next cubicle over insisted on describing their digestive troubles in great detail, you will probably love it. If you had one of those days filled with productivity and doting text messages from those you hold dear, you will probably hate it. Death Confetti is an antidote to dreariness and frustration. It’s the touch of strangeness that energizes you when the sheer dullness of everyday life threatens to drain the last drops of life force from you. Death Confetti encapsulates that moment when you sit on the bus, steeped in isolated misery, and you look at your fellow travelers and suddenly realize just how deeply odd and fascinating other human beings are. Death Confetti takes that split second of clarity, condenses it, puts it in a pill and invites you to swallow it. Take the medicine that Death Confetti offers you, and the darkest, most ennui-filled corners of your life will start to make perfect sense.

Beyond that, I won’t say much more, because analyzing a book like this is like trying to explain the beauty of a flower by pulling the petals off it. All you need to know is that Death Confetti is playful, mordant and funny, and if it occasionally skirts the boundary between profundity and infuriating tweeness, it also generally manages to stay on the right side of the line.