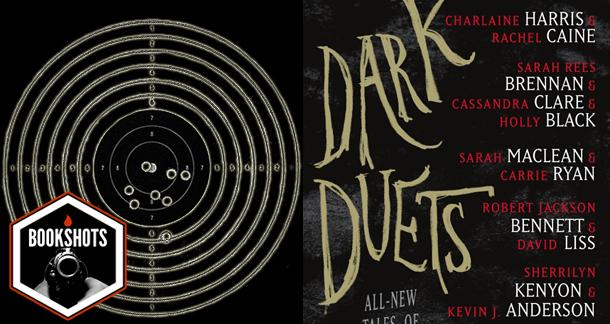 You never know what’s around the next corner – cannibalism, aliens, Satan’s GPS system – you get to the stage where you hardly dare look.

Here’s the concept: two (and in one case three) writers collaborate to create a never-before-published story, with something dark at its heart.

Two Helpings of Scariness for the Price of One

Anything by any of the contributing authors.

What do you call the dark imp that whispers madness into the ears of murderers? Whoever that is.

James Franco (hey – he does everything else).

The question here should be where do you want to live least? In which case my pick would be the bed and breakfast run by the cat breeders of Stuart MacBride and Allan Guthrie’s Replacing Max.

Some made me wince, some made me shudder, but this line from "Sisters Before Misters" made me howl with delight:

She could make him forget her misdeeds with a little magic, but she couldn’t forget the way he looked at her each time she disappointed him, the fresh horror and the ridiculous shock – as though he’d never seen anyone pull wings off a butterfly before. Or attach them to a mouse!

I don’t know which dark imp whispered into the ear of Christopher Golden, Dark Duets’ editor, and suggested the concept behind this anthology, but I’m glad he listened to that evil murmur. Because the idea he came up with is gloriously, compellingly twisted: ask authors specialized in the telling of dark tales to contribute a story. But instead of dancing alone, in the dark at midnight, they will perform a pas de deux. Each story in the collection is the result of a collaboration between two and in one case three authors. As Golden himself says in the foreword, it was a mad experiment. But did it work?

Resoundingly, yes. And not just because of the stories themselves, because at least half the amusement in reading this anthology comes from deciphering the mechanics of the process. Who came up with the plot? Who wrote which bit? How were differences in style and approach resolved? (I’m guessing by moonlight with silver bullets, or by lottery with the loser being stoned to death by their fellow writers). And when you start picking that apart, the interest only deepens. In some of the examples on offer the writers seem to have gone for the basic but anarchic tag team approach (you write a section, then I write a section) which results in plot twists as fun and abruptly dislocating as a ride on Disney’s Tower of Terror. In others, like the three hander "Sisters Before Misters" from Sara Rees Brennan, Cassanda Clare and Holly Black, the writers appear to have taken a character each. The results: mesmerizing chaos culminating in a theatre performance directed by squirrels with a woodsman-turned-rabbit in the starring role. But those are only the examples where the joins are visible. In others – like the funny, weird and horrible "Hand Job" from Chelsea Cain and Lidia Yuknavitch – the prose is seamless, leaving me wondering which alchemy allowed two creative talents to merge so completely (Gene therapy? Cold fusion? Coffee?).

And the other half of the entertainment does come from the stories themselves, which are, like their creators, wonderfully diverse and packed with gleeful mischief. There isn’t a theme, or a consistent style. You never know what’s around the next corner – cannibalism, aliens, Satan’s GPS system – you get to the stage where you hardly dare look. Some worked better for me than others, but all of them worked. Some worked spectacularly well – "Welded" from Tom Piccirilli and TM Wright gets my personal award for Most Disturbing.

So even if you aren’t a hardcore horror fan, or shrink from anthologies as probably being about little known cultures, pick up Dark Duets and take a look. There will likely be some strange song in there to please you.