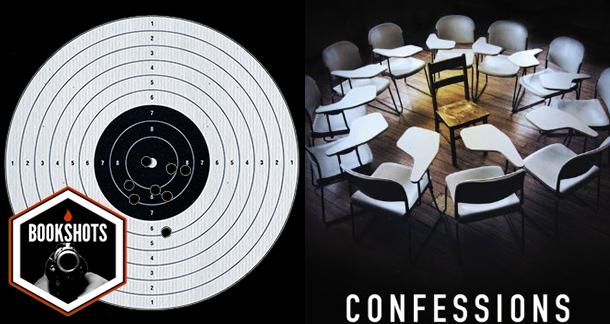 A shifting landscape of motivations, one in which the unsuspecting reader becomes morally complicit.

A middleschool teacher takes revenge on the students responsible for the death of her daughter.

Obscenity in the Milk

I could see Takako Matsu as Yuko, and Yukito Nishii and Kaoru Fujiwara as Shuya and Naoki... because I already saw them as those characters, in the 2010 film adaptation (which was quite good).

I've been to and love Japan, but I would not want to be a middleschooler in their public education system. (At least as portrayed in this book. Brutal.)

If I had cut the two of you to shreds with a knife, I would have hated the little pieces of you just the same.

People are calling this the Japanese Gone Girl. Not me, but some people are. It's the type of comparison that gets regurgitated and retweeted and tumbled ad naseum, but isn't entirely accurate. Both books are thrillers about women crossing invisible lines, but that's where the similarities end. I think. I've never actually read Gone Girl. I have seen the movie trailer, though.

Still, if you really wanted to get creative, you could call Confessions: Heathers as written by Albert Camus. That'd sell a few books.

The novel is separated into six sections, each told from a different character's viewpoint. This makes for a shifting landscape of motivations, one in which the unsuspecting reader becomes morally complicit. You'll want to hug a character one minute, and stab them in the throat the next. It's less an emotional roller-coaster and more an emotional tilt-a-whirl, unpredictable and chaotic. (Thankfully, it is not the dreaded emotional log flume. That would just be cruel.)

As I've found with many Japanese to English ports, the language is simple, unencumbered by stylistic flourish. This suits me and the story just fine. Quite a few chapters are told from the point of view of children, and there's nothing worse than a single-digit narrator who spins a yarn like a venerable Old Salt. The school setting and home life of the characters are distinctly Japanese, and the straight-forward prose helps acclimate unfamiliar readers sans confusion. So, if you find yourself thinking, as an American, "I would never do something so implausible," or, "That sure was convenient," immediately flagellate yourself with the Scourge of Liberal Shame, for being a cultural ignoramus.

Since the release of Confessions, Kanae Minato has gone on to have quite a successful career, publishing an additional ten novels and multiple short story collections. Will her local cachet translate to international success? Time and the fickle tastes of mainstream readers will tell. Mulholland books is banking on Confessions filling the morally ambiguous void left by Gillian Flynn. You never know, there may even be room for Ben Affleck in the American remake of the film.